The small Italian island of Capri is situated 5 km from the mainland in the Bay of Naples, a celebrated beauty spot and coastal resort since the days of the Roman Republic until now. It is also part of Campania.

The isle of Capri is the setting for William Somerset Maugham’s The Lotus Eater, a short story in which the Bostonian protagonist arrives in Capri on holiday, wherein he is so enchanted by the place that he abandons his job and decides to spend the rest of his life in leisure on the island.

Pronunciation of the name

Many brand names of products are pronounced ka-PREE in English-speaking countries, but if you want to pronounce the name of the island like Italians do, you have to say KAH-pree. 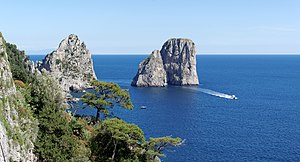 What to do in Capri

Capri is a place to do as little or as much as you like. The four cafes in the main square are the place to be seen in the evenings after the deluge of day trippers have left. Celebrities can occasionally be found sipping drinks there. High end shops line the streets if you feel the need for retail therapy.

From April to the end of the summer, the island also comes to life from an artistic and cultural point of view. Concerts are organized almost every evening in the squares or the splendid villas built by Tiberius, as well as painting and sculpture exhibitions, plays and dance performances. This wonderful island is a destination that attracts visitors of all nationalities!

Arco Naturale—Natural arch in the landscape reachable by a beautiful hike around the southern edge of Capri.

Where to eat in Capri

Some restaurants, especially around the town center, can be VERY expensive. A good alternative: go to the local grocery store (one near the port, another in Anacapri) and make your own delicious sandwiches. (However there are few park benches and few public spaces to sit and eat on Capri.) Cafes at the harbour are particularly costly (a can of coke will cost €5, while the same thing can be bought from a food shop in the town for €1).

After getting off the train that goes up the hill, walk up to the square with the pillars all around, and you’ll find a little drink stand. Buy a Red Orange Smoothie; they are excellent when the weather gets hot.

Where to stay in Capri

As with many other places, hike at your own risk. Cacti, prickly pears, bees, and steep slopes and edges are the primary things to be cautious of on some trails, but otherwise, hiking on Capri’s trails is generally quite safe. However, be careful when walking down paths around the villas when alone, as many of the residents of the villas keep large dogs which may roam freely onto the public pathways; these dogs are not particularly friendly to foreigners of the island.

From Capri’s port there are daily ferry trips to:

Covid-19 Italy
248,229
Confirmed
0
Confirmed (24h)
0
Deaths (24h)
0
Recovered (24h)
According to the Government in Italy, Italy has confirmed 0 new Covid-19 infections within Italy in the last 24 hours and furthermore 0 deaths have been reported throughout Italy. With the new deaths of 0, Italy now has a total of 248,229 Coronavirus/Covid-19 infections and the official death rate reported by the government of Italy is 14.2%. 35,166 died in Italy.

Verbania is a city on the promontory at the northern side of the entrance to the Borromean Bay, a western arm...

Vicenza is a medium-sized city located in Veneto, in northeastern Italy, and the capital of the namesake province. The city and the surrounding countryside...

Modena is a town of the Emilia-Romagna Region, in the middle of northern Italy. Understand The town is well-known all over the world,...

Langhe is a hilly region in the Cuneo province of Piedmont in Italy. It is home to a number of world famous wine producing...