Novafeltria is in Emilia-Romagna, in Rimini provinceand is part of the Montefeltro area.

Until 1941 it was known as Mercatino Marecchia. The current Town Hall was the 17th century residence of Counts of Segni from Bologna.

The closest airports are “Marconi” airport of Bologna, around 170 km away from Novafeltria; the “Ridolfi” of Forlì, at 70 km from Novafeltria; and “Federico Fellini” International Airport of Rimini, served with 2 flights daily from London Stansted by Ryanair.

The nearest train station is in Rimini. From there, there are buses connecting to Novafeltria.

Getting there by car is the easiest way. From Rimini, follow the strada provinciale 258 R Marecchia (SP 258). From Cesena, follow the Strada europea E45 towards Rome, exit at Sarsina, and follow the signs for Sant’Agata Feltria.

For getting outside the center, for instance to Perticara, the easiest way is by car.

It is important to accept that Italians drive in a very pragmatic way when the traffic is intense. Taking turns and letting people go in front of you is rare. There is little patience so if the light is green when you go into the intersection and you are too slow they will let you know. A green light turning to amber is a reason to accelerate, not brake, in part because the lights usually stay amber for several seconds. If you brake immediately when the light changes you are likely to get rear-ended.

The city is small enough to be walked.

There are buses connecting to Rimini, Pennabilli and Sant’Agata Feltria. 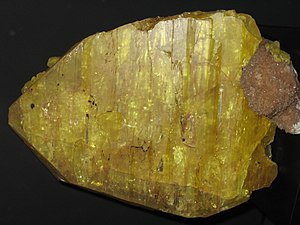 Sulphur from Sulphur museum in Perticara

Most pizza restaurants serve it only in the evening.

Pizza al Taglio is pizza with a thicker crust, cooked in a large pan. This is served by the piece, usually to take away, and is a good cheap way to get something to fill you up. Point to the one you want, indicate if you want more or less than your server is indicating with the knife. It’s sold by weight (the listed price is usually per 100 g, known as an etto, short for ettogrammo, i.e. hectogramm). This kind of pizza is eaten with the slices stacked on top of each other like a sandwich.

Look for a gelateria. You will be asked “Panna?” when it’s almost made – this is the offer of whipped cream on top. If you’ve already paid, this is free.

There are a few signs to keep in mind: “Produzione Propria” (homemade – our own production), “Nostra Produzione” (our production), “Produzione Artigianale” (production by craftsmen). If the colors seem dull and almost ugly it is probably natural, the bright colors being just a mix. Keep in mind, Italians usually won’t queue, but if they are in line for gelato, get in line yourself: you may have hit the jackpot.

Where to stay in Novafeltria

Novafeltria is a safe place, even for women traveling alone. There are no reported cases of thefts or violence on tourists. The Montefeltro area has been targeted by burglars, but no pickpockets have been signaled.

From Novafeltria, it is easy to get to the medieval towns of San Leo, Pennabilli and Sant’Agata Feltria. The Republic of San Marino in the surrounding area. Those who prefer the seaside and an intense night life may want to move on to the Rimini (province).