Verona is an historic city with a population of about a quarter of a million in north-eastern Italy’s Veneto region. It’s most famous as the setting for Shakespeare’s Romeo and Juliet and has been inscribed on the UNESCO World Heritage List.

Though close to the more popular tourism destination of Venice, many people consider Verona a more relaxed and pleasant place to visit. There are many visitors, but the number of tourists per square metre is lower.

Connections to the city:

Venice Marco Polo  is further but has far more flights. From there take the shuttle bus to Mestre railway station (25 min), then the train to Verona (1 hour) – see Venice: Get in by air page for shuttle bus details.

Also within a couple of hours of Verona are Venice Treviso and Bergamo airports. These have no obvious advantage. The Cartolari-Nichesola Chapel in the Duomo, featuring the Assumption by Titian

City bus schedules are difficult to obtain on-line and also not available on maps.google.com. The 11, 12 or 13 bus on weekdays will get you from the train station (Stazione Porta Nuova) to the Arena (Piazza Bra). Sunday and holiday schedules differ with a separate numbering system. You can obtain bus schedules sending SMS to a number printed on bus stop. Some of them have an indication of the time left for next bus to arrive.

You can pay the fare using euro directly on the bus, but only for one ticket, while you can easily buy tickets at a lower fare nearly everywhere there is a cigarette or lotto shop. ATV shops are in the railway station and in Piazza Renato Simoni, near the railway station.

Verona was a Roman city, and many Roman ruins have been preserved, notably the Arena. The ancient city was badly wrecked by the earthquake of 1117 AD, which led to a flurry of re-building. Therefore, most of the historical sights on view today date from the past 800 years, while the Roman city lies 6 metres below you.

Look out for architectural details related to the Scaligeri (or della Scala) family, who ruled the city from the 12th to 14th century – e.g. their family emblem is a ladder, scala in Italian.

Top sights are the Arena, Castelvecchio, the churches of St Zeno and of Sant’Anastasia, and the cathedral. Much of the pleasure of Verona comes from simply strolling the medieval centre, especially in the evening when the day-trippers have departed. The Arena hosts performances by the world’s top singers, and when these are on the whole city, not just the Arena, will be booked solid.

A little further out across the river, find the Castel San Pietro, the Giusti gardens, and the other amphitheatre. The walk along the riverside is usually enjoyable, but in 2016/17, the pavement between the Roman Bridge and the Garibaldi Bridge is under reconstruction, with no end in sight. 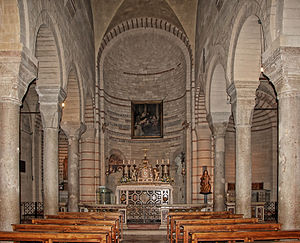 Interior of the Romanesque Santa Maria Antica, built in 1185 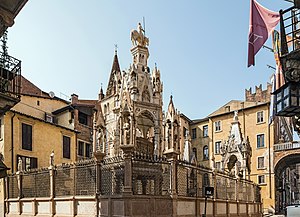 Scaliger Tombs (Arche scaligere): Tomb of Cansignorio in the foreground, the Santa Maria Antica church and the tomb of Cangrande I della Scala, and on the right, the tomb of Mastino II 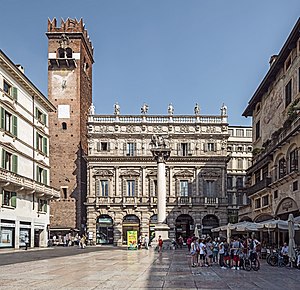 Avoid the hordes of tourists in Piazza Bra and head to Piazza delle Erbe. At least slightly more genuine, this Piazza has a number of good bars where you can sit and enjoy a coffee or aperitivo in the sun. Great for your coffee in the morning and your drinks into the evening.

Where to stay in Verona

Verona is frequented annually by millions of tourists, so you’ll be able to choose among a lot of different accommodation options, all a lot cheaper than nearby Venice. However it is essential to have booked hotel accommodation on days when the annual arena opera performances are taking place. Turn up on spec or late and it is possible to find every bed in the city taken.

There are three youth hostels in Verona, all within walking distance of the town centre and a short bus ride from the main train station (Porta Nuova). A tourist map, available from the station’s tourist information centre, will point you to their locations. The northeasternmost hostel of the trio, near Piazza Isolo (regular buses from Porta Nuova) has a stunning converted Renaissance complex complete with porticoes, verandas and a huge forested garden, dorm beds for only €15 per person, with a passable breakfast included.

Also consider several small bed and breakfasts in the immediate province, after all a car rental for €30/day and a substantial saving on the nightly fee is an acceptable turnaround. Especially if you need the car to visit the surroundings.

There is also a campsite:

Frescoes depicting St. Peter of Verona on the ceiling of the nave of the Basilica Santa Anastasia

The surrounding area around Verona offers access to some of Italy’s most spectacular scenery – to the north you have rolling hills with vineyards and small towns, to the west the Lake Garda (Lago di Garda).

Drive to the nearby valley Valpolicella, famous for its renowned Amarone, Recioto and valpolicella wines as well as for its ancient villas.

Lake Garda can be easily reached from Verona for a day trip. Buses run by APTV (the regional bus company) leave from Porta Nuova – catch a 62-64 bus in the morning from the railway station or from Corso Porta Nuova (the boulevard just south of Piazza Bra). It takes about 2-3 hours, depending on lakeside traffic (which can be heavy), to reach pretty towns of Malcesine or Torbole. Get a timetable (orari) from the tourist office or from APTV transport website (Lake Garda is in Zone C). Tickets can be bought from the tobacco shop down the road or on the bus. Lake Garda has its own theme park, Gardaland, with accommodation.

Other centres easily done as a day-trip by rail from Verona include Vicenza, Padua, Mantua and of course the big draw Venice.

Limone is a town on the edge of Lake Garda. Browse down for full details of the current Coronavirus situation in Lombardy...

Alba is a town in the province of Cuneo in Piedmont, Italy, with a population of 30,000. Introduction Alba was inhabited before Roman...

Arezzo is a town in Tuscany, Italy that was an important Etruscan town. About Arezzo Arezzo’s origins as a place of human habitation...

Lombardy or Lombardia is a northern region of Italy, and with 10 million people is the most populous one. Producing...

Veneto is a region in north-eastern Italy, with its capital in Venice. It was an independent republic until the invasion of Napoleon in 1797....

Carpi is a city in Emilia-Romagna. Carpi could be a nice stop in your trip from south to north of Italy on...

Procida is a small island near Naples in Campania, Italy. Understand Marina di Corricella Procida is the smallest island of the Gulf of Naples, relatively...

Chiusi is a city in the Val di Chiana region of Tuscany, Italy. It was one of the twelve cities of the Etruscan League. In...

South Tyrol (German: Südtirol, Italian: Alto Adige or Sudtirolo, Ladin: Sudtirol) is the northernmost region in Italy, bordering Austria to the north and northeast, Switzerland to the northwest, and the rest of...

Sirmione is a comune in the province of Brescia, on the peninsula of the same name in Lake Garda. The Ancient Roman...