Mount Vesuvius, Italian Monte Vesuvio, is in Campania, in Italy, overshadowing the Bay of Naples.

View over the Bay of Naples

Mount Vesuvius is perhaps best known for its eruption in Roman times (24 August 79 AD), described   by Pliny the younger, when Pompeii and Herculaneum were destroyed. The eruption left a large crater that can still be visited today. It is a dormant volcano that occasionally emits streams of lava (last minor eruption in the 1950s; although its dormant state could be an indication of a build-up of pressure and a coming explosive eruption). At the top of the volcano is a crater rim that affords a view into the crater that still fumes slightly. Besides that you will have (only on clear days, but the mountain is notoriously covered in fog or clouds) a stunning panorama overseeing the Bay of Naples, Naples, Capri, Ischia, the edge of the Amalfi Coast and more.

Going there will make you sweat a lot and set you back about €15 (including private taxi up the hill).

There’s a direct bus-line that leaves twice daily from Naples Central Station square and goes straight up to the visitor parking. It’s run by one of the minor bus companies (not the city transport) and you might have a bit of a hard time finding it, but unless you have a prearranged group tour it’s perfect. It runs on a timetable, so it’s less capricious than the taxi service from Ercolano. Two-way ticket from Naples Station runs at €13.50. Bus leaves at 09:20 and 10:35 at the Garibaldi station.

Take the Circumvesuviana railway (Sorrento-Naples line). From Naples buy tickets on the lower level of the Central Station aka Stazione Centrale a Piazza Garibaldi, or bus to Ercolano Scavi station in Herculaneum or the Pompei Scavi station.

You can either wait for the local bus that costs around €8.70 return (from Pompeii, cheaper from Herculaneum). The bus goes only around twice daily from Herculaneum – at 08:45 and 12:45.

When you come out of the station, a private ‘tourist office’ to your left runs trips up Vesuvius – €10 roundtrip, plus €8 admission fee. Downside is you only have an hour and 15 min to climb the summit and back – little time to rest. If you take longer than that, they leave you to fend for yourself or require you to pay another €5 per person for return. They also offer lifts to the ruins for €3.

Among others, EAV bus directly from across the train station departs multiple times a day (every 50 minutes in season, perhaps with 2-3 hr break at noon) and takes approx. 40-50 minutes. The online timetable may not be accurate – more reliably it should be available (at least) at the tourist info point at Naples Garibaldi station and at the Pompeii train station.

Cost is €2.7 one way. The Campania Artecard is not accepted.

Conveniently, the bus stops in front of the ticket office, and departs back from the park entrance.

Or you can use a private taxi company. From Ercolano Station you exit the station into a small square. Over to the left is a private tourist center. They offer a lift up and down the mountain for €10 each person. For €18, they will offer a ticket with entry to the crater. They are able to get special entry tickets for about €4.50, so when you purchase the package, they keep more than the €10. However, if you buy your own ticket to the crater, it’s still €8 so you may as well pay them the €18. They will typically wait until a car (minibus) is full and leave then. They will agree with all people in the car to wait for all of you at the upper car park for 90 minutes. From the car park you’ll have to hike up the last bit before you can actually see anything exciting. They say the walk is about 800 m long , going uphill most of the time and ending at the 1170-m mark. Wear good walking shoes as the trail is covered with dust and rock pebbles. If you have missed the public bus, this will be your only option to get up to the mountain.

The tourist information office is closed on sundays.

You can also do a 6-km hike to the summit along the winding roads. To do this you will need to take the local bus service ANM 5 or 176 from Ercolano to San Vitto. From there you will be able to walk to the summit. You can take in the views of the national park and enjoy the local wildlife. You will still need to pay the entrance fee when you arrive at the crater, but for the energetic ones it is a must!

You can get to the upper parking area, take the exit Ercolano from motorway and go up via the roads SP19 and SP140. Be prepared to part with at least €5 for the parking fee. Also it’s a good idea to go there earlier in the morning to avoid the jams that may happen along the narrow road.

There are a couple of huts selling cheap and sometimes bizarrely inappropriate souvenirs and expensive drinks around the rim. Rather take a bottle of water with you.

Weather: even on hot days you can get strong and chilly winds at the rim so take a lightweight fleece to wear at the top. 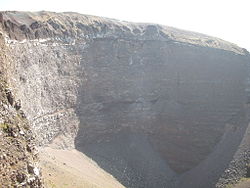 Where to stay in Vesuvius

Vesuvius is an active volcano and may erupt any time in the near future. Over the last few centuries, Vesuvius has erupted at intervals ranging from 18 months to 7½ years, making the current lull the longest in 500 years. Its lack of eruption may merely indicate a build-up of pressure, which may result in a more explosive next eruption, posing a lethal hazard to over 500,000 residents living in the same place that got destroyed in 79 AD.

Listen to local authorities if there is any news about the state of Vesuvius, and do not wander any further than the trails go.