Fukuoka (福岡) is the capital of Fukuoka (prefecture) and the largest city on the island of Kyushu with 2.5 million citizens including its suburbs

Classed as being among the oldest cities in all of Japan, Fukuoka is on the northern side of Kyushu Island. Since it has these ancient roots, it still clings to traditional culture and a way of life that is reflected within its eateries and its buildings and sights.

Many people love living in this attractive city because of the greenery and its metropolitan feel. It ranks twelfth in the most desirable places to live in Japan.

The city is circled by lovely mountains on three sides, and the fourth side opens to the north into the Sea of Genkai.

The interesting thing about Fukuoka is that a land reclamation site now houses the modern day city and more building is proceeding on man-made islands.

Fukuoka is a modern city, divided historically by the central river into two separate cities, Hakata (博多) and Fukuoka (福岡). The main railway station and port are still known as Hakata Station and Hakata Port. There are city centers in both Hakata and Tenjin.

There is a Tourist Information Center in Tenjin with English speakers available under the Nishitetsu Fukuoka station. For information in English, visit the Rainbow Plaza, located on the 8th floor of the Inter Media Station (IMS) building. The IMS is accessible by subway and is just a three-minute walk from the Tenjin station. In the middle of Hakata JR train station there is a Tourist Information Center (sometimes with English speakers) with brochures in English, Japanese and other languages. They can help with transport information and bookings. On the third floor of the ACROS building, near Nakasu, you can find more information in English.

The surrounding cities and towns make up the prefecture of Fukuoka.

Fukuoka is a good starting point for first-time visitors to Japan. Being a sizable, modern city it’s still not hard to get around. A subway connects most of the city’s main attractions, providing transportation between Hakata, Tenjin, Fukuoka International Airport, Meinohama, and Nishijin (where you can find Fukuoka Tower and the baseball ground of the Softbank Hawks: Fukuoka Yahoo Dome). The main station in Hakata marks the terminus of the Sanyo Shinkansen bullet train. The Kyushu Shinkansen line also terminates here, and links the Sanyo Shinkansen directly with Kagoshima, at the southern tip of Kyushu.

Hot humid summers are the norm for this part of Japan, and the winters are quite mild. Rain falls more heavily from June to September with June and July seeing more rain than other months. This is obviously why those months are the most humid but the good news is that it rarely snows here. The typhoon season is in August and September so autumn is probably the driest and most time to visit Fukuoka.

A word of warning here – there is a fault line running right through Fukuoka and they have experienced some rather strong earthquakes in recent years. However, one of the fault lines expects quakes every fifteen thousand years so visitors may be lucky to miss any rumblings.

Fukuoka has its own airport with a high speed trains bringing people into the city. There are also ferries and hydrofoils available, and this is a great way to see Fukuoka from the sea. Within the city are three subway tracks so it is quite easy to get around.

The Nishitetsu train can be found in Tenjin, and visitors can take the local train around the area or the rapid train. Both have the same price and are connected to Dazaifu which makes it extremely easy for tourists to see what they are interested in.

For those who want to try out the local bus, look for Hakata station bus terminal. For a small ticket price, the visitor can get on the bus which loops between Hakata and Tenjin. Also look for the bus which takes people directly to Marinoa City where there is an excellent shopping mall.

Of course, the easiest way to see landmarks and places of interest is on the City Loop Bus Green. There are also tours on offer that will take people to all the ‘hot’ spots. Therefore, if a place like Dazaifu Temangu Shrine is on the menu, this is the most convenient way to get there. Try buying the one day pass which also qualifies the user for some discounts in outlets and shops around the city.

If in this part of the world, it is quite a common trend to take the ferry over to the islands. They can be reached by road, but the ferry is more interesting. Try out the dinner/sightseeing tour which includes French cuisine in its price for something just a little more glamorous.

Taxis are in plentiful numbers and, depending on what size the vehicle is, there are set prices. Even sightseeing tours can be booked like this and makes the journey more intimate and comfortable.

When in this city visitors must try the Velotaxi. This is an exceptionally environmentally friendly way to get from place to place in the city. It is a two seat car which can squeeze through places where a normal car would not stand a chance.

Lastly, bicycles are very popular modes of transport, and visitors can get off on their own to see the sights. They are on hire from all the large hotels, and there are specific bicycle parks where they can be picked up.

Get in to Fukuoka

The airport had 4 terminals. T1 and T2 are housed in one building, 5 min apart on foot. The subway station is located under Terminal 2.

From Tokyo, flying to Fukuoka is much faster than the Shinkansen, and not significantly more expensive. The usual one-way fare on Skymark Airlines from Tokyo Haneda is ¥19,800, compared to ¥22,320 from Tokyo Station on the Nozomi Shinkansen, and steep discounts are available if you book in advance (as low as ¥5,300 with Skymark’s “SKY Bargain” discount). The flight takes 2 hr while the train takes five. If you have a Japan Railway Pass (JR Pass), of course, you’ll still want to take the train, though you can’t take the fastest of the Shinkansen (“Nozomi”) with the JR Pass.

Travel by train to Fukuoka 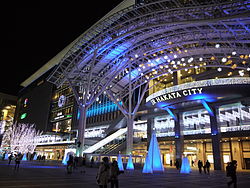 Ōsaka (大阪) is the third largest city in Japan, with a population of over 17 million people in its greater metropolitan area. Read more

The South Korean city of Gwangju is located in the region of Honam in the South of the country, near Read more

Okinawa is an island in the Ryukyu Islands chain, and is at the southern end of Japan. There are hundreds Read more

Tokyo is the capital of Japan and is one of the 47 prefectures. It is renowned for being the biggest Read more