The vibrant Japanese city of Kobe is possibly most known for its devastating earthquake that rocked the port city in January 1995 claiming the lives of more than 6000 people. Having risen victoriously from the depths of the ashes, the rebuilding of the city is a true testament to the sheer tenacity of the Japanese people who live there.Modern day Kobe is a bustling cosmopolitan metropolis perched on the fringes of the booming Kobe port, between the ocean and the resplendent Rokko mountain range. Considered to be one of the most beautiful Japanese cities, Kobe is nestled between famous neighbours – expat central, Osaka and Kyoto.

Vivacious, dynamic and diverse, the small yet popular city has been declared as the ultimate place to live, and although always popular among residents, the tourist trend is very much on the rise. Just a hop, skip and a jump away from Osaka, many people love coming to experience the effervescent ambience of Kobe, and the incredible contrasts of modern day city juxtaposed with a glorious natural reserve on the foot of the Rokko Mountains.

Sensational waterfalls, lush Japanese forests and an abundance of wildlife including wild boars, gorgeous giant butterflies, raccoons, the most beautiful and colourful birds that you have ever seen and insects that are the size of dinner plates, are all perched majestically along the slopes of the mountain ranges that peer down over the buzzing port city that never seems to sleep.

The capital city of Hyogo Prefecture, Kobe has roots that are seeped way back before the 19th century, when the Kobe was one of the leading ports, and significantly was the first Japanese port ever to open their channels of trade internationally.

Kōbe (神戸) is a city in the Hyogo Perfecture of Japan.

A cosmopolitan port city with an international flavor, hemmed in by Mt. Rokko, Kōbe is often ranked as the best place for expatriates to live in Japan. The city has a population of over 1.5 million people.

A port in what would become Kōbe was established as a concession to western powers in 1868, during the time when Japan was opening to the world. Nagasaki and Yokohama had already begun serving foreign ships nine years earlier. Today, a synagogue, Japan’s first mosque, Japan’s first Sikh temple, a Chinatown, and European architecture mark Kōbe as a place where foreigners and foreign culture first arrived in Japan.

At 5:46 AM JST on January 17, 1995, the Great Hanshin Earthquake, measuring 7.3 on the Richter Scale, struck near the city. The quake killed 6,433 people, made 300,000 people homeless and destroyed 10,000 buildings and large parts of the port facilities, and toppled the Hanshin Expressway, an elevated freeway. It was one of the most costly natural disasters in modern history. However, visitors will not see any of the aftermath of the quake as the city has been restored.

Kobe Airport is on reclaimed land

From Kobe Airport, the Port Liner light rail to Sannomiya Station runs about every 10 minutes (18 minutes, ¥330). Sannomiya Station offers connections to the Japan Rail (JR), Hanshin, Hankyu and subway lines. From there, a small trip on the subway will link you to the Shin-Kobe bullet train station (¥200). If coming from Sannomiya to the airport, be sure to board a train marked “Kobe Airport”, as some head to the Kita Futo branch line instead.

Kansai International Airport is 70km from Kobe and is the nearest international airport. The quickest way to get there is on the Kaijo Access high-speed ferry from Kobe Airport, which runs every 45 minutes (29 minutes, ¥1,850 or ¥1,000 for foreign visitors). However, if you are coming from or going to Sannomiya Station or Rokko Island, it’s nearly as fast and less of a hassle to take the Airport Limousine bus (60-75 minutes, ¥1,980 one-way, ¥3,080 round-trip). Alternatively, you can take the JR Kanku Kaisoku (関空快速) rapid to Osaka station and change there to the Shin-kaisoku (新快速 – Special Rapid) that runs to both Sannomiya and Kobe stations (90 minutes, ¥2,410). 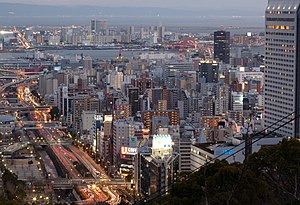 View from above the Shin-Kobe station towards the port

The nearest station on Japan’s high-speed shinkansen network is at Shin-Kobe station. From Tokyo station, Shin-Kobe is 2 hours, 50 minutes away via Nozomi (¥14,670); 3 hours and 20 minutes via Hikari (¥14,270; no charge with the Japan Railway Pass). From Shin-Kobe station, take the Seishin Yamate subway line one stop to Sannomiya (¥200). 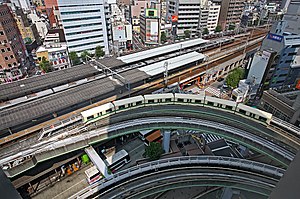 Sannomiya Station is squeezed into the dense centre of Kobe

From Osaka, there are several ways to arrive in Sannomiya:

From Kyoto, Sannomiya is 50 minutes away from the main train station via Shin-kaisoku (¥1,050; no charge with the Japan Railway Pass). You can also make the run to the area in 30 minutes via bullet train, but it is more expensive, and if you have the rail pass, you can only take one train every hour without changing trains (the Hikari that runs through to Okayama).

From the central area of Kyoto (near Gion and the shopping district), you can reach Sannomiya in 70 minutes via Hankyu limited express, changing once at Juso station (¥600). Hankyu trains depart from the Kawaramachi and Karasuma stations.

From Nara, direct Kintetsu trains operate to Sannomiya Station on the Hanshin line via Namba every 20 minutes (75 minutes, ¥940).

Tokyo is the capital of Japan and is one of the 47 prefectures. It is renowned for being the biggest Read more

Fukuoka (福岡) is the capital of Fukuoka (prefecture) and the largest city on the island of Kyushu with 2.5 million citizens including its suburbs Classed as Read more

Korea’s second largest city after Seoul, Busan is not as impressive and cosmopolitan as the capital, but it does feature Read more

Although the South Korean city of Seognam is deemed to be a city within its own right, realistically it is Read more

Sunroute Hotel Nara only JPY 11186 per Night 1110 Takabatakecho Nara 630-8301, Japan Boasting a pleasant ambience and comfortable accommodation, this property is an ideal...

ANA Crowne Plaza Hotel Toyama only JPY OnRequest per Night 2-3 Otemachi Toyama 930 0084, Japan If you are planning for a particular holiday at...