Chongqing (重庆; Chóngqìng, formerly spelled Chungking) is fast becoming the most economically important city in the interior West China, with an urban population of around 8.8 million. In addition to the central urban area, the municipality of Chongqing also includes some 80,000 km² (31,000 sq mi) of the neighboring countryside and smaller towns, with approximately 30 million people altogether.

Chongqing is also the launching point for scenic boat trips down the Yangtze River through the Three Gorges Dam. The spectacular Buddhist Dazu are three hours west of Chongqing City in the outlying Chongqing Municipality and are listed as an UNESCO World Heritage Site.

Chongqing is notorious for its hot and humid climate. The air quality, winter or summer, can be challenging to people with respiratory problems due to massive amounts of smog. Chongqing has been ranked by the World Bank as one of the most polluted cities in the world.

Chongqing Municipality has a population of 32 million and is located in the People’s Republic of China. It was earlier part of the Province of Sichuan. 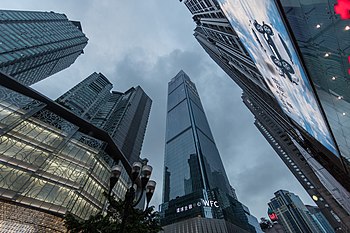 Chongqing is one of the four municipalities in China, the cities that are not part of a province but report directly to the national government; it is the only municipality that is not on the east coast, (the others are Beijing, Shanghai and Tianjin). It was historically a part of Sichuan province, and is culturally considered to be part of it.

When the Revolts overpowered the Ming Dynasty across China between the year of 1627 to 1645, they defeated Chongqing which was part of today’s Sichuan Province.

The first inland commerce port in China to be open to foreigners was in Chongqing in the year of 1891. It became a municipality under the Republic of China from 1929 onwards but Chiang Kai-shek’s provisional capital was bombed during the Second Sino-Japanese War by the invading Japanese but many lives were saved due to the protection formed by mountain ranges around Chongqing. During World War II, most of the industrial factories and universities moved from the East of China to Chongqing.

There are several ways to get from the airport to the city:

Travel by train to Chongqing

There are three major train stations in Chongqing:

High speed trains (G series) link to Chongqing North Station to Beijing in about 12 hours, and to Chengdu in about 1½ hours. In addition, there are slow trains that take about twice as long.

Most train tickets can be purchased through the help of the hotel your are staying. The tickets are then delivered to the hotel for you to pick up.

Long distance buses travel to Chongqing from almost anywhere. There are numerous buses into Chongqing, most notably is the hourly service to and from Chengdu, Nanchong, and Xi’an. From the west Chengdu is 2½ hours and to the east Wanzhou is 3 hours, both on good highways and good buses. Avoid the “sleeper” buses as they must be the most uncomfortable way to travel ever invented.

The provinces of Hubei, Hunan, Guizhou, Sichuan and Shaanxi are neighboring provinces of the Municipality of Chongqing.

Chongqing has a booming economy, in fact it is the third fastest growing economy in the People’s Republic of China. The GDP in 2007 was 411.18billion Yuan with an annual growth rate of 15%. The per capita GDP was however below national average with 14,622 Yuan.

Myles Bernard Weston, a pilot from Australia, cooperates with his colleagues in Xiamen Airlines to fight against the coronavirus outbreak Read more

A patient who has recovered from novel coronavirus pneumonia sends a medic roses at a cabin hospital in Wuhan, Hubei Read more

Corona Virus Madness: Money such as cash to be quarantined too

Does China still have the corona virus epidemic under control? 1,700 infected doctors and nurses are already among the 63,900 Read more