Heilongjiang Province (黑龙江省; Hēilóngjiāng) is in the far northeast of China. The province is famous for its fierce winters, snow and ice festivals and Russian influence. 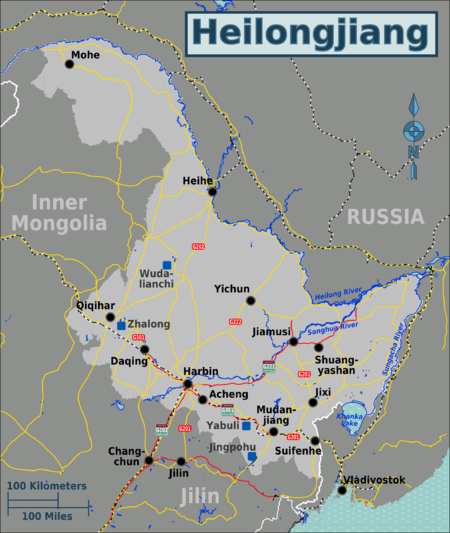 This northeast province derived its name from the river (Black Dragon River) flowing along the border China has with Russia. A distinctive geological land form and peculiar climate combine to turn Heilongjiang into a fabulous tourism destination.

What to do in Heilongjiang

Heilongjiang food is part of the northeastern cooking tradition with many dishes originating from Manchu cuisine. The food here is influenced by the long winters and relies on preserved foods and hearty fare. The staple crop is wheat and not rice and more raw vegetables and fish than elsewhere in China are eaten here.

The many different types of Russian-style bread.

The winters are long and bitter in Heilongjiang and it has a sub-arctic climate. January is the coldest with the temperatures ranging between -31o Celsius to -15o Celsius. It is summers in July and yet the temperature averages between 18o Celsius to 23o Celsius. The summers are short and some times cool. Rain occur mostly during the months of summer.

The Amur valley is found in the northern border. The other interior parts are mostly in the low altitudes and are flat lands. Many rivers like the Nen River, the Songhua River and the Mudan River and all tributaries of the Amur flow on these flatlands. Along with Russia’s Primorsky Krai in the border, you can see the Khanka Lake or the Xingkai Lake.

The local Economy of Heilongjiang

The common herds found in Heilongjiang are the cattle and the horses. The cattle of this area are very fertile and provide highest source for the milk amongst all the other province divisions in China.

Heilongjiang is rich with natural resources like gold, coal and graphite and other natural minerals. There are oil fields in Daqing which are the important source for the petroleum for China. Heilongjiang is also a very important location of windmills which are used to generate power.

This year the per capita disposable income among the residents in the urban area of Heilongjiang has reached 10,245 Yuan. This is a significant rise of 11.6% when compared to that of previous year. In the year 2007 residents of Heilongjiang had a nominal GDP of 708 billion Yuan. It had an annual growth rate of 12.1% and it’s per capita GDP was 18,500 Yuan.

Changsha is the capital city of the province of Hunan. Hunan Province is situated to the south of Lake Dongtine Read more

The Twenty-first Century Hotel Beijing only USD OnRequest per Night 40 Liangmaqiao Road Chaoyang Beijing 100016, China This three-star hotel has all the necessary technical...