Sichuan (四川; Sìchuān; previously known as Szechwan), is a province in Southwest China. It is China’s fourth most populous province; at 80 million it has about the population of Germany.

Historically, Sichuan has been mainly an agricultural region, though with a few important cities. Over the past several decades, it has been a major supplier of migrant labour to more prosperous coastal provinces in East China and South China. Sichuan is now developing rapidly.

On May 12th 2008, an earthquake with a magnitude of 8.0 rocked Sichuan Province. The epicenter of the earthquake was about 90km northwest of the capital city of Chengdu. The Death toll rate was put at 68.500 354,045 were injured.

Sichuan Province in the Sichuan basin is bordered by the Himalayas in the west, Yunnan mountainous areas to the south Qinling range in the north. The Yangtze River flows in the basin and eastern China has it as upstream. In central Sichuan, a tributary of the upper Yangtze River the Minjiang River , which joins it at Yibin. The Longmen Shan fault was formed by plate tectonics.

Mountainous climate characterized by very cold winters and mild summers, with plentiful sunshine are typical of western areas. The sunny, subtropical climate with very mild winters is characteristic of southern part of the province, including Panzhihua. But summers are hot and humid.

The largest dam in the world, The Three Gorges Dam, is on Yangtze River in Hubei province. It is built to control floods in Sichuan and Yunnan province.

One of the Four Great Traditions of Chinese cuisines is the Sichuanese cuisine. It is best described in four words: fresh, hot, spicy and fragrant.

Chengdu, the capital of Sichuan has a fairly large modern airport with domestic connections to many cities all over China and also some international connections. Internationally you can fly from Europe (KLM), Singapore, Japan, Korea and Hong Kong, and many people arrive and depart using the very good air services available.

China has an extensive railway network and Chengdu is well connected to many cities by rail. One recent innovation is a fast train between Chongqing and Chengdu. Chongqing is a very large city which was part of Sichuan until 1997 but now is an independent municipality. Many trains shuttle every day between Chongqing and Chengdu. Not so long ago, the journey took anywhere between 4 and 8 hours depending on stops. Now a fast bullet train (over 200 km per hour) runs several times a day between the two.

Another option is buses. Buses run between Chongqing and Chengdu which takes around 4 hours. However, bus travel seems to be less reliable than trains because of road works that are often occurring.

There are also several options for travelling within Sichuan. Many popular tourism destinations such as Leshan and Jiuzhaigou Nature Reserve are serviced by buses. The network is quite extensive and the highways are good. Buses also seem to mostly run on time.

Air travel is available within Sichuan if you want to go to Jiuzhaigou National Park which is over 300 km from Chengdu. 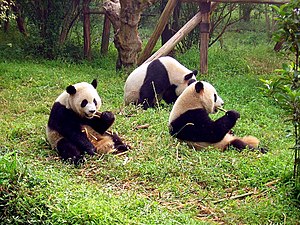 Go hike and camp in Yading National Nature Reserve of China, where Joseph Rock fell in love with the Chinese landscape and natural world.

Sichuan cuisine is well-known worldwide, including dishes like Kung Pao Chicken (宫保鸡丁 / 宮保雞丁, gōngbǎo jīdīng) and Twice Cooked Pork (回锅肉 / 回鍋肉, huíguōròu). It is also famously spicy, with liberal use of chilies and the indigenous Sichuan pepper (花椒, huājiāo). Sichuan peppers are used to make málà (麻辣) food, which is not just spicy but produces a unique numbing sensation—it makes your mouth feel tingly or numb.

One specialty of the area is the Hot Pot (火锅 / 火鍋, huǒguō), a sort of wide-mouthed soup pot into which an assortment of vegetables and thinly sliced meats are dropped to cook. Typically, the pot has two parts separated by a partition; one side is extremely spicy, the other milder.

Sichuan food plays approximately the role in China that Mexican or Italian food does in the US or Indian food in the UK. It is found more-or-less everywhere and in every style of restaurant from cheap hole-in-the-wall to very fancy indeed.

Sichuan suffered a catastrophic earthquake in 2008 centered on Wenchuan County, about 100 km north of Chengdu. Many towns were nearly completely destroyed and over 80,000 people killed with hundreds of thousands more injured or homeless. Reconstruction is now complete, but there is always a risk of another quake.

Many of West Sichuan’s main attractions are located at altitudes above 3,000 meters and thus altitude sickness is a threat. Make sure to monitor your health and take it easy for a day or two if moving from the lowlands to higher elevations.

To help combat this sickness, many local Chinese eat medicine known as Hong Jing Tian. These are red capsules that the soldiers of the People’s Liberation Army use to help them quickly adjust to altitude conditions in the Western Chinese provinces. Local tour companies will have a ready supply of this medicine if you ask.

There is also tension in Western Sichuan between the Chinese government and the mainly Tibetan people there, and travel restrictions may apply to this area. See the warnings under Tibet.

While the fired Wirecard board member Jan Marsalek is still in hiding, another executive of the insolvent group has turned...

India is now the country with the fourth most corona infections and the country’s healthcare system is collapsing under this...

Closing brothels in India would be a grand but empty gesture. It will only hide the state’s abandonment of migrants...

Despite the almost two-month curfew, India once again reports a daily record for infections with the corona virus. The Ministry of...

The Bizarre Life of Jan Marsalek, the Number 2 at Wirecard – Eating Sushi from a naked woman’s body

The name Jan Marsalek now stands for one of the largest economic scandals in Germany. With Wirecard AG, he managed to...

Wirecard Shares on the way of Becoming a Penny Stock !

Wirecard has filed for bankruptcy and the business, or what is left of it, practically belongs to the creditors. Nevertheless,...

Jan Marsalek, former Wirecard board member and COO, is sought worldwide and should be on EUROPOL and INTERPOL during this...

At the beginning of the week it still looked as if Wirecard’s Bank would also go into bankruptcy because too...

Many of Payoneer’s millions of Freelancers have their freelance work paid into the card account, which is easier to open...

After IsaanLive reported last Thursday extensively on the Round-Tripping with Senjo Group based in Singapore, the Singapore authorities are expanding their...

As we’ve been searching for where Wirecard’s MCA business is (and the bulk of it looks not to be in...

In November 2018 Wirecard claimed it had launched a new Merchant Cash Advance (MCA) Product and in both May and...

Ex-Wirecard COO Jan Marsalek is wanted in Manila – Could he be in Mindanao Hiding?

Jan Marsalek, may be hiding in the Philippines. The COO had been fired last week and was responsible for day-to-day...

The Fall of Wirecard, Fraud, Round-Tripping, Money Laundering and the Web of Lies

It is not the first time, now in Germany, already back in 2017 they conducted the same schemes in Singapore...