Although there is an active independence movement in Tibet, from a traveller’s point of view, Tibet is under the control of the Chinese government, and travellers to Tibet will need to obtain Chinese visas and the like. This page does not represent a political endorsement of either side of the dispute.

Tibet (Classical Tibetan: Bod; (<templatestyles src=”Tibetan/fonts.css” />བོད་), Lhasa dialect: Pö; Mandarin Chinese: 西藏, Xīzàng) is sometimes described as the “roof of the world”; the entire region is on a high plateau and there are many large mountains. The area has its own unique culture, and most travellers will find some of the plants, wildlife and domestic animals quite exotic as well. Entering Tibet you feel as though you’ve found an entirely different world. 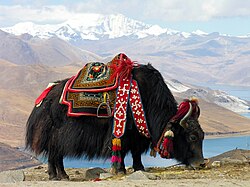 Politically, Tibet is an autonomous region of China, but there is an independence movement and even a government-in-exile headed by the former ruler, the Dalai Lama.
Travellers who disagree with the current political situation may think they have an ethical dilemma because if they go to Tibet they feel they are implicitly supporting the Chinese government, with some of their money going to the Chinese authorities. However the Dalai Lama encourages foreigners to go, so that they can see the situation for themselves and because Tibetans welcome their presence.

Tibet is also becoming a more and more popular travel destination among the Chinese themselves. It is almost as exotic to someone from another area of China as it is to someone from the other side of the world, and there is now a good rail link.

The vast majority of the population are Tibetan but there is an international debate to extent Tibet more autonomy but the Chinese government argues that ample autonomy has been provided under Article 112 ~ 122 under the constitution of the People’s Republic of China.

This article only covers the Tibet Autonomous Region (TAR), although there was once a Tibetan Kingdom considerably larger than the autonomous region’s current borders.

To learn more about other regions that are culturally affiliated with Tibet, see the Chinese provinces of Qinghai and Yunnan; the Indian regions of Ladakh, Lahaul and Spiti, and Sikkim; and the independent states of Bhutan and Nepal.

Tibet has a long and complicated history, at times an Empire, at times warring with China, and at times a tributary of China or the Mongol Empire. It first came under common rule with China when the Mongols conquered both around 1300.

For most of the Imperial China (1644-1911), Tibet was nominally part of the Chinese Empire and there was a Qing official called an Anban in Lhasa who had tremendous influence, but the Dalai Lama and Panchen Lama (high-ranking religious figures) actually ran things.

A British expedition to Tibet, in fact a temporary invasion by British Indian forces, led by Colonel Francis Younghusband, took place between December 1903 and September 1904, with the purported mission of establishing diplomatic relations and resolving the dispute over the border between Tibet and British Indian Sikkim. The expedition fought its way into Lhasa and reached it in August 1904. A treaty was signed, and the British forces withdrew to Sikkim in September, but nevertheless continued the physical occupation of Chumbi Valley until February 8, 1908, even after having received the full payment from China. Actually, the Anglo-Russian Convention of 1907, where Britain and Russia signed an agreement to regulate their economic and political interests, widely seen as the official end to the Great Game, stipulated that neither country would interfere in Tibet, which lies in China’s sphere of influence. In early 1910, Qing China sent a military expedition of its own to Tibet for direct rule.

However, after the Qing Dynasty fell in 1911, Tibet declared independence under the authority of the 13th Dalai Lama. Tibet was an isolated de facto independent nation for almost forty years; its borders were larger than the current TAR and included what are now portions of Qinghai, Sichuan and Yunnan. The Chinese government, however, never accepted their claim to independence. 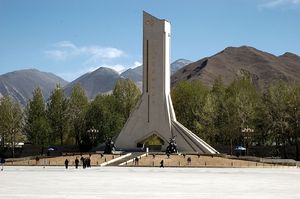 The Monument to the Peaceful Liberation of Tibet in Lhasa, a heavily guarded memorial to the 1950 invasion

After the retreat of the Nationalists to Taiwan and the founding of the People’s Republic in 1949, the Communists turned their attention towards Tibet as they wished to consolidate control over all former Qing territories. In 1950, the People’s Liberation Army (PLA) invaded Tibet. In the UN Security Council, the Nationalists (who still had China’s seat) vetoed a motion that would have censured the invasion; they too considered Tibet part of China.

In 1951 an agreement was signed that reannexed Tibet back into China, giving Tibet — on paper — full autonomous status for governance, religion and local affairs. The current (14th) Dalai Lama was even made a vice-secretary of the Chinese Communist Party in the early 1950s. However communist reforms and the heavy-handed approach of the PLA led to tensions. After a failed Tibetan Uprising in March 1959, the Dalai Lama and many of his followers went into exile in India, setting up a government in exile in Dharamsala. Each side accuses the other of failure to live up to the 1951 agreement. The CIA assisted the uprising and Chinese propagandists still mention this often.

Tibet’s isolated location did not protect it from the terror of the Cultural Revolution (1966-1976), and large numbers of Tibetans were killed or imprisoned at the hands of the Red Guards. Tibet’s rich cultural heritage as well as much of neighboring Chinese ancient culture were reduced to ruins. After the end of that era, the rise of Deng Xiaoping and China’s “reform and opening up” policies since 1978, the situation in Tibet has calmed considerably, though it still remains tense. Monasteries are slowly being rebuilt and a semblance of normality has returned to the region. Despite this, Tibet still suffers from independence-related civil unrest from time to time. The Chinese authorities often close Tibet to foreign tourists, usually in March, the anniversary of the 1959 uprising.

To a considerable extent, the issues in Tibet are the same as for indigenous peoples anywhere, such as Uighurs in China’s western province Xinjiang or Indians in North or South America. The government points proudly to development work such as mines, railways and highways; locals complain that those facilities are all owned by outsiders, outsiders get most of the good jobs while locals do most of the heavy work, and environmental consequences are often ignored. The government say they are improving education; locals complain that the system aims at forcing assimilation by using a language foreign to them. Immigration is encouraged and sometimes subsidized; locals complain of an influx of outsiders that do not want to adapt to local culture and often do not even bother to learn the local language. When the locals get really agitated, the government does not hesitate to send in troops to “restore order”; generally the locals see this as vicious repression, but the government claim they are only dealing appropriately with “hostile Indians”, “reactionary elements” or whatever.

The question of Tibetan sovereignty is a hot-button issue in China. The Party Line is that Tibet has always been part of China and foreigners have no business meddling in internal Chinese affairs. There was no invasion in 1950, only the central government asserting its authority over a province to liberate it from a severely oppressive feudal system, a corrupt medieval theocracy with slavery. (That part makes a lot of sense to Chinese, liberated from their own feudal system in 1911.) Western powers are being extremely hypocritical since they roundly condemn theocracy (rule by priests) in Iran and simultaneously support it in Tibet. Many Chinese people agree with the government position, and some of those will ask foreigners about Tibet then firmly “correct” their “errors”. Avoiding such discussions is a good policy and very important while traveling in China.

As of 2018, the Chinese government has begun to clamp down on Buddhist religious observances in Tibet, and children under the age of 16 are barred from entering temples or participating in any form of religious activity.

Jiangxi (江西) is a largely agricultural province in the southern central region of China. Situated in the South of the People's Republic Read more