Zhejiang (浙江) is in a province in East China, very close to the major city of Shanghai. 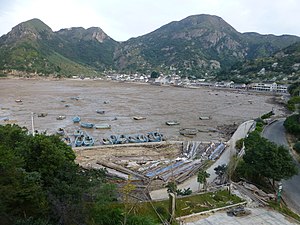 Yu’ao, a typical fishing village on the rugged coast of the Dayu Bay, in Zhejiang’s southernmost Cangnan County.

Zhejiang is a very small province, it usually makes sense to prefer train over plane whenever possible considering both money and time.

High-speed rail is most recommended. Most of the cities and towns in Zhejiang has at least one fast train station.

Most cities have taxi providers, though online taxing platforms like Didi may be preferred.

The province of Zhejiang came to be well known during the period of the Southern Song and Yuan dynasty. The province of Zhejiang gained recognition for its production of a particular celadon ceramic. The Southern Song Longquan celadon consisted of a delicately potted body of porcelain which was primarily an uninteresting color of light gray but would be then made to look unique by covering it with a substantial greasy layer of glaze of a particular bluish green tint. The Yuan Longquan celadon wares were larger which had their decoration styles and shapes drawn from the styling of the Middle Eastern ceramic and metal wares. The Yuan Longquan celadon wares were covered in a relatively thinner layer of green glaze.

The climate of Zhejiang is a humid subtropical type with four distinctive seasons. The seasons of Spring starts in the month of March with significant rain and changing weather. Summer lasts from June to September and is hot, humid and sultry. The Fall season is by and large dry, temperate and bright. The Winter season in Zhejiang lasts for a short time but is very cold and frigid. The Winters in the southern region are not as pronounced. On an average, the annual temperature is around 15 to 19oC. The average temperature in the winters, in January is around 2 to 8oC while the average in the summers, in the month of July is recorded to be around 27 to 30oC. the level of annual rainfall and precipitation in Zhejiang is about 1000 to 1900 mm. There is copious amount of rainfall in Zhejiang in the Summer months and by the end of the summers, Zhejiang is threatened significantly by typhoons which begin forming in the Pacific ocean.

The Zhejiang province has for ages of tradition been known primarily as the “Land of Fish and Rice”. Some of the important commercial ports are Zhoushan, Wenzhou, Taizhou and Ningbo. between the Haiyan County and Cixi the Hangzhou Bay Bridge is being built and once the construction is complete, the bridge will be the longest sea crossing bridge in the world.

The industries in Zhejiang are focused upon electromechanical industries, chemical industries, food, and construction materials and textiles. The administration in Zhejiang follows a particular model which has earned the moniker the “Zhejiang model”. The model lays emphasis on prioritization by encouraging entrepreneurship, with importance to smaller businesses which are highly responsive to the changes in the market, promoting large scale investments by the public sector into infrastructure and highlighting the need for production of low cost goods for the double purpose of domestic consumption and for exports. Following this scheme has made Zhejiang one of the richest and most prosperous provinces.

In 2007 the nominal GDP of Zhejiang was recorded to be 1.86 trillion Yuan and a per capita of US$4,885. In comparison to many other provinces of China, the development and progress rate in the varying regions of Zhejiang is more balanced and stable. Even though the areas of the county side are relatively lagging behind, in 2006 the per capita disposable incomes of eleven major cities in Zhejiang have been given ranks in the top 30 Chinese cities.

One of the most esteemed and celebrated teas of China, the Longjing tea originated in Hangzhou. The Longjing tea is also known as the Dragon Well tea. The cuisine of Zhejiang is divided into many sub divisions including the cuisine of Hangzhou and is one of the eight great traditions of cuisine in China. The region of Hangzhou is also well known for its exquisite silk umbrellas and folding fans.

Changsha is the capital city of the province of Hunan. Hunan Province is situated to the south of Lake Dongtine Read more