Fuerteventura is one of the islands that makes up the  (Spanish: Las Islas Canarias). It is the second largest island of the Canaries to Tenerife, with population around 106 000. Fuerteventura is located south of , the two islands lie only 11 km apart. 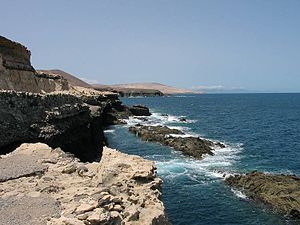 The island is about 100 km long and 30 km wide. The mountains (of volcanic origin) in the north reach a height of up to 700 m above sea level (Maxorata). The highest peak is in the south – peninsula of Jandía, the Pico de la Zarza (807 m).

The second largest among the Canary Islands after Tenerife, Fuerteventura is a major European holiday destination, mostly because of its majestic unspoiled beaches. It’s no coincidence that the island was chosen by Quality Coast International Certification Programme.

Sapphire waters end up to tropical white-sand beaches, while the volcanic nature of the island also bequeathed it with some velvet black-sand shores. Due to the strong winds around the area, Fuerteventura is very popular with local and foreign surfers, who find the waves here ideal for practicing their favourite sport.

With the first tourist facilities, including the airport, popping up during the 60s, the island is efficiently developed for large crowds, however still not corrupted by mass tourism. If you happen to be around during Carnival period (February/March) don’t miss the colourful festivities which liven up local routine.

Seventeen bus routes serve the island of Fuerteventura, with some running relatively frequently and some only once or twice a day. If possible rent car to ensure better flexibility. Most rental offices are located at the airport. Taxis are also available, but other than short rides they cost more than the daily rental price.

Things to see and in Fuerteventura

Located at La Lagita Village, on Fuerteventura’s eastern side, Oasis Park is a huge complex of 800,000 square meters. The park features a zoo, botanic gardens and dining and shopping facilities. Visit the zoo to take an up-close look at hundreds of animal species, including exotic birds, giant mammals and wild reptiles. Don’t miss the flamenco lake and the hippo pool.

A 30-minute walk from the village of Corralejo, spreads the Corralejo Natural Park. A protected area of golden sand dunes, the park is adjacent to one of Fuerteventura’s most fascinating beaches. Play around the dunes, the sand actually being tones of smashed shells, and then go for a refreshing dip at the nearby turquoise waters. The beach stretches out for 7 kilometres, but beware that sea currents at this area are strong, so swimming away from the coast is not recommended.

Lajares is a small village close to Corralejo, which is mostly famous for its handmade lace. Apart from two picturesque windmills, the village’s major attraction is a local shop where visitors can see the process of lace making performed by local women. You also have a chance to purchase some textile if you like. The shop is called “Artisania Lejares”.

Former capital of Fuerteventura, the town of Bentacuria is definitely worth a visit to experience the local daily life.  Named after one of its earliest residents, Gadifer Juan de Bethencourt, the town features picturesque whitewashed Buildings and a few interesting sights. Iglesia Catedral de Santa Maria de Betancuria is a lovely 17th-century church, which features fascinating Moorish interiors and a 14th-century Gothic bell tower, which actually belonged to a former church destroyed by an earthquake. Ermita de San Diego Chapel is also worth a visit. Estimated to be the place where San Diego prayed during his pass through the area, the current chapel dates back to 16th century, since the 15th-century original building was destroyed by the Berbers.

Children will have a blast at Oceaniarium Explorer Water Park. Offering dozens of amusing water activities, it is also popular with grownups. Swim among frisky sea lions, watch huge whales playfully roiling the water, join fishing trips or see the bottom of the sea through the scuttle of a small submarine. Fuerteventura is divided into six historical municipalities (though most tourist areas are fairly recent):

A small village in the south (west coast of it), Jandia peninsula. It has nothing to do with the tourist harbors on the rest of the south coast. It is worth a trip if you have a car – without it, it’s hard to reach. The place itself is not very big, but has a bar.

Back at the time, Franco had here a military restricted area. From here, Franco pursued his interests in Africa. Nearby is also the Villa Winter, which is named after the name of the builder (Gustav Winter), surrounded by many legends.

There is a non-dangerous, but very nice beach. Hardly any people are here. In the vicinity of Cofete there are a lot of places where you can make beautiful landscapes.

Eternally long yellow sand beaches mark the place, inviting for long walks. In the area of ​​the village itself, they are guarded and quite cramped. To the south it becomes less sandy. Here the surfers and the kite surfers share their area. The waves and wind are always certain here.

West from Corralejo. It is a small place that has been the focus of tourism for only a few years. The individual life has not yet fused very much with the tourist. This is ideal for individual tourists.

The tourist buses also pass El Cotillo. The destination is the fortress of the old fishing village, where lime was burnt in the past. From the tower it was seen whether pirates were approaching the island. In the fortress, art pictures are exhibited. For a glimpse of El Cotillio this stop is enough. But the place has offers next to the fortress too. In the small Cotillo there are surprisingly many good restaurants (especially Canarian and Italian cuisine).

The place has a lot of peculiarities. From the fortress one has a beautiful view of the coasts to the north and south. The lagoon beach in the north towards lighthouses is suitable for families with small children. In the south the waves roll harder to the beach.

Hourly bus from Corralejo to El Cotillo is available. The direct bus connection with Puerto del Rosario is much rarer. It is best to visit the place with a rental car – parking is without problems.

Jandia itself consists only of hotels, shops, bars and restaurants. The village has even a small zoo.

The most important asset of Jandia is surely the beach. From Morro Jable, the beach with bright yellow sand stretches far east. There are beach sections that are guarded (with rent couches, bars and fast food), but also sections where you are very alone.

In the direction of Morro Jable the waves can hardly be felt. Going east, the waves become stronger. At the corner, where it goes northwards, a rock divides the beach – high waves can be enjoyed there.

The main street is also the shopping street. All are located in the north of the street, so you always have a view of the sea.

On Thursday, the African market takes place on the market square of Jandia. Plagiarism of all kinds can be bought here – in addition to fresh fruits, vegetables.

The village begins with the harbor. There is a daily ferry service to Las Palmas – approx. 3.5h hours. Morro Jable can not be reached directly from the port, a rock wall blocks the path.

The village of Morro Jable rises up the mountain. Here are the people who work in the Jandia hotels. From the port you have to go up the mountain, then down to the village center. The town center has not yet been taken over by tourists and there is something to do until late nights. 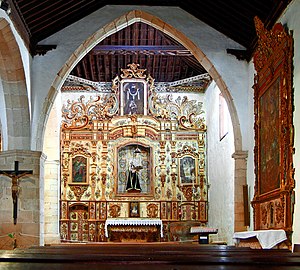 Altar of the right nave of the Iglesia Nuestra Señora de Regla in Pájara, Fuerteventura
The capital of the southern province, but it’s just a small village in the middle of the island. Here the taxes from Costa Calma and Jandia flow – which shows in the city (like in town hall). In the summer even a fresh water swimming pool is available – in contrast with water prices on the island.

The town is nevertheless worth seeing, to get a glimpse of the life of the locals. You can enjou some Spanish cuisine – or coffee “Leche y Leche”. It’s an espresso, on which one puts sweet condensed milk. If you turn it around, it becomes sweet milk coffee, if you do not, then you have a special taste experience.

The church in the center has a nice portal. Aztec art can be visited here. There is a lot of speculation as to how these works have emerged. The most plausible – a monk came home richly after the trip to South America and donated this portal. 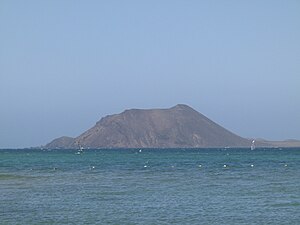 Fuerteventura is a volcanic island, in some places untouched but in others heavily developed for tourism. “Fuerteventura” roughly translates to “strong winds” or Fuerte (Strong) Ventura (Venture).

Spanish is the national language in Fuerteventura, although English and German are widely spoken in many tourist areas.

From Corralejo port, the ferry takes about 20 minutes to Lanzarote.

The two major lines are:

Flights from Spain, Europe, as well as from the other islands land daily, via the .

It plays host to a mix of scheduled flights from national operators such as:

Being a tourism destination there are also numerous charter operators flying into the airport. These include:

The airport has only one runway and 5 boarding bridges but is still undergoing expansion. It handles around 45,000 flights and 5 million passengers per year.

A hire car is the best option for discovering the remote wilderness regions, and numerous car rental companies are available.

The bus lines from Puerto del Rosalio (via airport) to Correlejo, Caleta de Fuste, Morro del Jable and Cotillo are easy to handle, cheap and very reliable (timetables). It is extremely easy to get from Correlejo to the sand dune beaches south of town.

Travel by bicycle in Fuerteventura

Renting a mountain bike is a great way to see the island. There are many bike paths that run parallel to the main roads and many well-marked trails 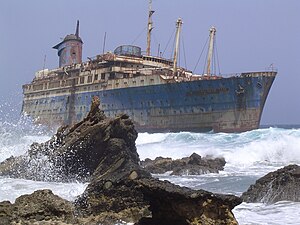 Important centers of tourism are Jandia and Costa Calma on the south, and Corralejo on the north.

Where to stay in Fuerteventura

Apparently you could sleep from €25,- per night and up, The official web of the Canary Islands has a nice system for locating hotels and offers in Fuerteventura.
Read more:
Garachico Coronavirus Covid-19 outbreak Tenerife

Garachico is a small town in Tenerife. Understand Garachico (from Guanche gara, or 'island', and Spanish chico, or 'small') is named after the uninhabited Read more

El Médano is a town in Granadilla de Abona.

Retiro is a district in eastern-central Madrid. While it is dominated by the Retiro Park, it also houses 125,000 residents. This article also Read more

The western part of Gran Canaria is mostly a destination for nature lovers. Get in Use the roads or port 1 Puerto de Read more

Among Spain’s most important ports, Malaga may disappoint visitors at first sight. This Andalucian city has a strong industrial profile Read more

Firstly established as one of Spain’s major travel destination by the hippies during the 60s, the island of Ibiza has Read more