Frankfurt (German: Frankfurt am Main) is the largest city in the German state of Hesse, and is considered the business and financial centre of Germany. It is the fifth largest city in Germany after Berlin, Hamburg, Munich and Cologne. The city is known for its modern skyline, and for hosting the headquarters of the European Central Bank, the Deutsche Börse stock exchange and numerous German financial services companies. Furthermore, it hosts some of the world’s most important trade shows, such as the Frankfurt Auto Show and the Frankfurt Book Fair. Located on the river Main at a crossroad of the German Autobahn system and connected to several high-speed rail lines, with Germany’s busiest airport on its outskirts, Frankfurt is one of the most important transportation hubs of Europe.

Sitting at the geographical center of the European Union, Frankfurt is a prominent transportation and finance hub with global influence based in Germany. Visitors can look no further than the city’s futuristic skyline to view the impressive list of companies and organizations that call Frankfurt home. Nicknamed ‘Mainhattan’, the European Central Bank, Frankfurt Stock Exchange, German Federal Bank and Deutsche Bank all reside in the city’s impressive financial district.

Frankfurt is a city of contrasts. Wealthy bankers, students and hippie drop-outs coexist in a city that has some of the highest, most avant-garde skyscrapers of Europe next to well maintained old buildings. The downtown area, especially Römer square and the museums at the River Main, draw millions of tourists every year. On the other hand, many off-the-beaten-track neighbourhoods, such as Bockenheim, Bornheim, Nordend and Sachsenhausen, with their intact beautiful 19th-century streets and parks are often overlooked by visitors.

It’s the heart of the Rhine-Main region, spanning from Mainz and Wiesbaden in the west to Hanau in the east and Gießen in the north to Darmstadt in the south and has some 5,500,000 inhabitants in the whole surrounding metropolitan area.

Frankfurt is the place where Germany’s major autobahns and railways intersect. About 650,000 people commute to the city each day, not counting some 700,000 people who live here. With a huge airport — the third-largest in Europe — it is the gateway to Germany and for many people also the first point of arrival in Europe. Further, it is a prime hub for interconnections within Europe and for intercontinental flights.

In the years following 1968, especially in the late 1970s and up to the early 1980s, Frankfurt was a centre of the left wing Sponti-Szene, which frequently clashed with police and local authorities over politics and urban design issues (specifically whether or not old buildings should be torn down). Several members of these radical groups went on to have quite respectable careers in politics, among them Daniel Cohn-Bendit (long time leading MEP for the Greens) and Joschka Fischer (Foreign Minister and Vice Chancellor 1998-2005), though their erstwhile radical and violent antics did hurt them in their later political careers.

Frankfurt has one of the highest percentage of immigrants in Germany: about 25% of Frankfurt’s people have no German passport and another 10% are naturalized German citizens. With about 35% immigrants, Frankfurt is one of the most diverse of German cities.

Frankfurt is home to many museums, theatres and a world-class opera. 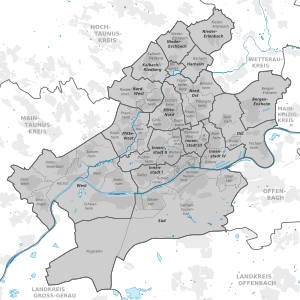 The map of Frankfurt’s subdivisions

Frankfurt is divided into 16 Ortsbezirke, which are further subdivided into 46 Stadtteile. As Frankfurt is an expansive city with a large area given its population, most of those are of little interest to a tourist, with most attractions concentrated in the Ortsbezirk Innenstadt I (there are four Ortsbezirke starting with Innenstadt (“inner city”), distinguished by Roman numerals). Some Stadtteile of particular note are:

The best times for Frankfurt are late spring to early autumn. The summers tend to be sunny and warm around 25°C (77°F). Be prepared, however, for very hot summer days around 35°C (95°F) as well as for light rain. The winters can be cold and rainy (usually not lower than -10°C/14°F). It rarely snows in Frankfurt itself.

If you intend to stay overnight, you may wish to avoid times when trade fairs are held, as this will make finding affordable accommodation a challenging task. The biggest are the Frankfurt Motor Show (Automobil-Ausstellung) every two years in mid-September (next in 2017) and the Book Fair (Buchmesse) yearly in mid-October; see Fairs for details.

The beating heart of German culture, industry, commerce and history, Munich, the capital of Bavaria is a stunning example of Read more

Stuttgart is the 6th largest city in Germany and has a population of over 600,000 people. The name Stuttgart comes Read more

The corona virus has nothing to do with me, but unfortunately racism does

Germany is my Home and that will always be a matter of course for me. My parents came to the Read more

Fight in Munich after a drunk shouted at two Chinese women

The city of Mainz has a rich and impressive history dating back over 2,000 years when it was first founded Read more