Central Thailand, also known as the Central Plains, is the low-lying central region of Thailand. It is centered around the giant urban agglomeration of Bangkok.

Central Thailand can be divided into three regions: 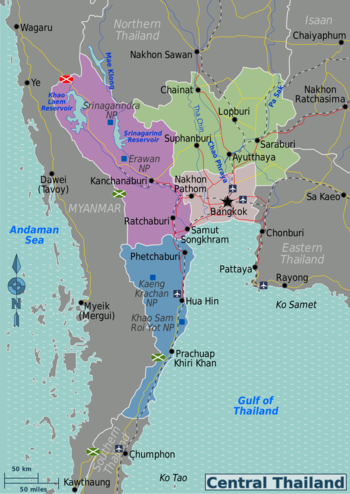 Bangkok Metropolitan Area comprises Bangkok and the five provinces surrounding it: Samut Sakhon and Nakhon Pathom in the West and Nonthaburi, Pathum Thani and Samut Prakan in the Basin. 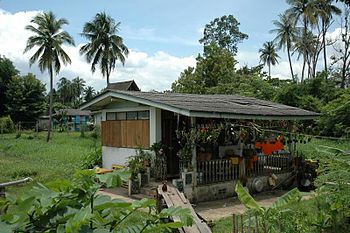 Most visitors to Thailand will arrive at Suvarnabhumi Airport, Thailand's largest airport 15 km (19 miles) east of Bangkok. It is roughly a 45 minutes ride from the centre of Bangkok, but heavy congestion could make that trip into 1,5 hours or more. More information about the airport can be found in the Bangkok article.

The Airport Rail Link connects Suvarnabhumi Airport with stations in the city, including Makkasan and Phaya Thai where you can interchange with city rail lines. You can also wait in line at the queue for a metered taxi at the first floor; a trip to the city costs about 250-450 Thai Baht. Always use the official taxi stand, though, and make sure the meter is turned on; otherwise, you might get in trouble later on.

Travel to Central Thailand by car

The Central Plains has good road connections with the east, south, north and northeast of the country.

Two main roads connect the Central Plains with Eastern Thailand. The main road is Sukhumvit Road, also known as Route 3, which starts in Bangkok and via Pattaya reaches all the way to Trat and the Cambodian border. Another route goes east to Aranyaprathet from which the border with Cambodia can be crossed to Siem Reap and Angkor Archaeological Park (but don't even think about driving on the Cambodian part).

There is a lot to see in the central region. Most visitors arrive in Bangkok, a true treasure house that literally has hundreds of sights. Prime sights are the Grand Palace, Wat Pho, Wat Arun and Jim Thompson's House, but it is just a small fragment of its historical and cultural heritage. The Central Thailand is less inviting for foreigners, but there are some sights you can see. Samut Prakan has some interesting museums, or you could take a boat ride north to Nonthaburi, or even better, Ko Kret.

There are many day-trips you can undertake from Bangkok. The Summer Palace at Bang Pa-In makes for a nice stop on the way to Ayutthaya. Ayutthaya has been the capital of Siam for 400 years and its historical remains should not be missed. There are literally hundreds of structures spread over and around the island, so renting a bicycle or moped is recommended. A short train ride north brings you to Lopburi, a smaller historical town known for its macaques. Many visitors take in Lop Buri before getting onto the sleeper train to Northern Thailand.

There are endless fields of shrimp farms and rice paddies West of Bangkok, and of course the floating markets. The most popular among foreign visitors is Damnoen Saduak, but the locals prefer to visit Amphawa or Tha Kha. Samut Songkhram makes a good base for getting to the floating markets. A scenic way to get here is with the Mae Khlong Railway, a slow and rustic train that requires a boat transfer at the fishing village of Samut Sakhon. Nakhon Pathom makes a nice half-day visit for the Phra Pathom Chedi, the world's tallest stupa.

Going west, the terrain becomes more hilly as you get into the River Kwai Valleys. Kanchanaburi is another popular stop on the tourist trail for the Bridge over the River Kwai and its World War II Museums. If you have a few days to spend in this area, some of the interesting attractions include the Erawan Falls and Hellfire Pass. A popular activity is to take a train ride over the bridge, just for the heck of it. You could even go all the way to Sangkhla Buri and Three Pagodas Pass, a bus ride of four hours to the border with Myanmar.

If you're heading for the south, the Northern Gulf Coast has a lot to offer visitors. There are the beach resorts of Hua Hin, Cha-am and Ban Krut. Phetchaburi has a charming old quarter, and is often visited as a day-trip from Bangkok, Hua Hin or Cha-am. Hua Hin is also home to the waterfalls of the Kaeng Krachan National Park and the natural scenery of the Khao Sam Roi Yot National Park. Finally, you could continue the way to the beaches and islands of Southern Thailand.