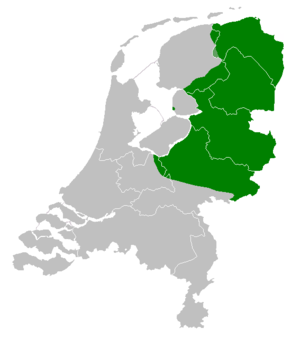 Low Saxon in The Netherlands

Since Dutch Low Saxon, like its counterpart across the German border, is not a unified language, it is often hard to find two people speaking the same version of Dutch Low Saxon. However, its clear resemblance to Dutch and the fact that most people in the Netherlands were taught the English, it won't be hard to be understood if you speak a poor Dutch Low Saxon. Communication is more likely to be in Dutch or even English, however the locals would be impressed seeing a foreigner talking with them in their own dialect.

Writing system and dialect represented on this page

The writing system chosen to write Dutch Low Saxon is the Algemene Nedersaksiese Schriefwieze (ANS) developed in 2011 by the Wikipedia Community. It was made in order to be able to then create a Dutch Low Saxon version of Wikipedia. It is now considered a true, valid writing style for Dutch Low Saxon, used in other contexts a Wikipedia or internet.

The dialect proposed here is highly inspired by the Drenthe dialect (Drèents), however, we tried to choose the most common forms to kind of represent a true image of the Dutch Low Saxon dialects. Don't forget however that it is not one single dialect, and that the sentences proposed on this page may be pronounced differently in some regions of the Netherlands.

Dutch Low Saxon has some vowel sounds that are not known in many other languages so they may be hard to learn.