Finnish (suomen kieli, suomi) is spoken in Finland and by Finns elsewhere, predominantly in Scandinavia. Whether travellers to Finland need to learn Finnish is doubtful, since most Finns — including virtually all under 50 — speak at least some English. However, since so few people make the effort, you're guaranteed to get delighted reactions if you try. 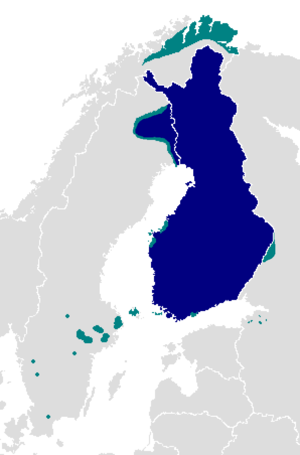 Blue = spoken by the majority, green=spoken by a (sizable) minority.

Finnish is a Finno-Ugric language and hence completely unrelated to most other languages. In particular, Finnish has grammatically nothing at all in common with the Nordic languages, English or Russian. Although there are many old loan words especially from Swedish but also from other European languages, they are not necessarily recognizable due to the very different phonology. The use of modern neologisms instead of borrowing is common, but there may be a less used loan word in addition to the neologism: a polygon may be called polygoni, although the common word is monikulmio (a direct translation from the Greek).

The origin of Finnish and its relatives traces back over 5000 years to nomadic peoples of the Ural mountains in Russia that migrated westward. The details of the migration and the relations between languages are still topics of scientific debate. The closest major modern relative, Estonian, is spoken across the Gulf of Finland. The Sámi languages of Lapland and the Murmansk Peninsula are also related, as are a host of small languages in Russia. While Hungarian is not by any means close, Hungary and Finland have a special relationship as Finnish for a long time was the only other Finno-Ugric language that was a main language of a sovereign country. Except for Kven in Northern Norway, Meänkieli in northern Sweden, Karelian, spoken by a minority across the eastern border, some other minority languages in Russia, and arguably Estonian, Finnish is not close to mutual intelligibility with any of its relatives.

Finnish is an agglunative language, and suffixes express what English expresses mostly with prepositions. For instance, junalippu Helsinkiin means "train ticket to Helsinki", while junalippu Helsinki is hard (but possible) to understand.

Also new words are often formed from the same root by endings: kirjain, kirjasin, kirjuri, kirjoitin, kirje, kirjelmä, kirjasto and kirjaamo are all substantives related to kirja, "book" (letter, font, bookkeeper, printer, ...), and then there are related verbs and adjectives.

Reading signboards can be difficult as use of loan words is uncommon, and those used are not necessarily recognized. Using a dictionary, especially for longer texts, is complicated by the word inflection; also the stem of many words varies somewhat (such as lippu, lipun for ticket).

Colloquial speech differs significantly from what is described here: (minä) olen → mä oon ("I am"). The formal pronunciation is still more or less what you will hear in the news, what is taught in school and what is easiest for others to understand.

The Finnish language is fairly easy to pronounce: it has one of the most phonetic writing systems in the world, with only a small number of simple consonants and relatively few vowel sounds.

Native English speakers tend to have the most problems with vowel length and the distinction between the front vowels (ä, ö, y) and back vowels (a, o, u). English does make similar distinctions – consider the "a" sounds of father (back) and cat (front), or the difference in the "i" sound for bit (short) and beat (long) – but you will need to pay extra attention to it in Finnish.

In Finnish, all vowels are single sounds (or "pure" vowels). Doubled letters are simply pronounced longer, but it's important to differentiate between short and long sounds. Example:

The basic Finnish alphabet consists of the following letters:

Additionally the letters š and ž appear in a small number of loanwords and are pronounced like English sh and as s in treasure, respectively. The letter w also occurs infrequently in proper names and is treated identically to v. Lastly, the letter å occurs in some Swedish proper names and is pronounced like a Finnish "oo" (similar to English "aw" as in "law"). The beginning learner needs not worry about these minutiae.

Long vowels are indicated simply by doubling the vowel in question.

Diphthongs (vowel sequences) like the uo of Suomi (Finland) are common. They retain the individual sounds of their vowels, but are slightly blended together to be pronounced in one "beat".

If a Finnish consonant is doubled, it should be pronounced lengthened. For plosives like p, t, k, this means getting your mouth ready to say it, but pausing for a moment. Hence mato (worm) is "MA-to", but matto (carpet) is "MAT-to".

Word stress is always on the first syllable and is usually weak; compounds words have more than one stressed syllable. Don't confuse stress with vowel length; they occur independently in Finnish. There is no tone whatsoever in Finnish speech, just a long string of fairly monotone sounds, with all syllables given equal value except the first one. Foreigners tend to think this makes the language sound rather depressing; Finns, on the other hand, wonder why everybody else's languages—including Russian—sound so sing-songy.

Finnish grammar is radically different from English (or any Indo-European language, for that matter), making Finnish a rather difficult language to master, and Finns love to regale foreigners with horror stories of compound words a mile long and verbs with seventeen suffixes tacked on. Basically, everything in a sentence (nouns, verbs, adjectives, pronouns) inflects to indicate who is doing what, why, when and in what way, so constructing even a simple sentence requires lots of tweaking about:

Nouns can be declined in 14 different cases for handling things like "getting some coffee and getting the coffee, going into a pub, being in a pub, getting out of the pub, being on the roof, getting onto the roof, getting off the roof, using something as a roof and so on, which are encoded into the word endings (kahvia, kahvi, pubiin, pubissa, pubista, katolle, katolta, kattona).

Then there is a whole assortment of additional suffixes, leading to improbable but entirely grammatical monsters like talo ("house") → taloissammekinkohan ("also in our houses, perhaps?") or kala ("fish") → kalastajamaisuudettomuudellansakaan ("even by using his non-fisherman-likeness").

The good news is that most of these monstrosities are limited to formal written Finnish, although something like menisinköhän (go-would-I-question-doubting; thinking aloud: I'd perhaps go, what'd you think) is not too uncommon. It is possible to "speak like Tarzan" (without conjugating anything) in subject-verb-object order like English and still be more or less understood. Minä mennä kauppa, minä nopea ostaa leipä (I go shop, I quick buy bread) will get you a zero in Finnish class, but it gets the message across.

And there are some minor consolations for the aspiring student: Finnish has no articles and no grammatical gender. Rules for conjugation are often complex, but at least they are very regular (rules below are simplifications, which happen to work in many cases).

Phrases in the following phrase list use the informal singular (sinuttelu), which is by far the most common form in modern Finnish and appropriate for almost all situations a traveller might encounter.

Note: Due to the ease, specificity and regularity of Finnish pronunciation, the difficulty of transcribing long vowels, and the general inaccuracy of English-based phoneticizations, it is highly recommended you take a few minutes to learn the alphabet instead of relying on the phoneticizations. That being said, however, Finns are often quite excited to hear a foreigner attempt to speak the language and tend to be very forgiving of pronunciation blunders. 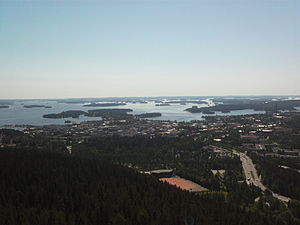 Kuopio as seen from the Puijo observation tower

Similarly to Italian and Spanish, the verb by itself reveals the person, therefore the personal pronoun is often omitted, except in third person.

Note that the decimal comma is used. Decimal points can occur on badly localized computerized displays and similar, but usually the point is used to separate groups of three digits:

a million
1.000.000
one euro twenty cent
1,20
one euro
1€, 1,– (you will never encounter the version used in English speaking countries with the currency symbol before the amount)

In the spoken language the 12-hour clock is more common, with AM/PM specified informally where necessary (no fixed words). The 24-hour clock can be used also then, and it is used almost exclusively in tables, for opening hours and the like.

The hours are often inflected: 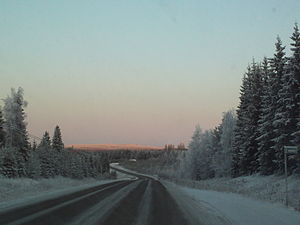 Due to the difficulty of conjugating various place names, the phrases below are not always grammatically correct. They will, however, definitely be understood.

Replace 'i' in '-in' with the preceding vowel, as in Vaasa – Vaasaan. Exceptions where '-lle' is used instead are rife and irregular, for instance Tampere – Tampereelle. Places that take their name from a lake, river, rapids, or other waterway (-järvi, -joki, -koski) are suffixed with -lle, thus Ylöjärvi – Ylöjärvelle, Seinäjoki – Seinäjoelle, Äänekoski – Äänekoskelle. Using the wrong form can sound funny (e.g. when meaning literally going into the body of water), but will usually easily be understood. Other exceptions may sometimes make your sentence more confusing (Tarzan speak can help if you get stuck).

In general, the name of the language is the same as the country, but uncapitalized.
eg. Espanja → Spain, espanja → Spanish 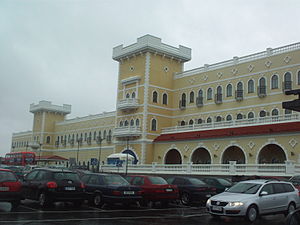 NOTE: Finland's currency is the Euro, one of the world's major currencies, which can be exchanged everywhere in the world. Hence Australian or Canadan dollars are about as accepted as Malawian kwacha – in other words shopkeepers would probably think you're joking. US dollars, Swedish kronor and Russian roubles might be accepted at select souvenir shops and hotels but don't count on that. In practice, if you do not have Euros at hand, pay by card. 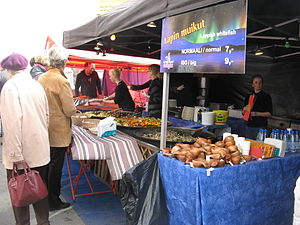 Street food including fried vendace at a market in Turku, in the front traditional wooden mugs for sale (as souvenirs)

The Market Square in Helsinki

Finnish police and border guard in a patrol boat