Northern Thailand shares borders with Myanmar and Laos, as well as with the Central Plains and Isaan.

From north to south: 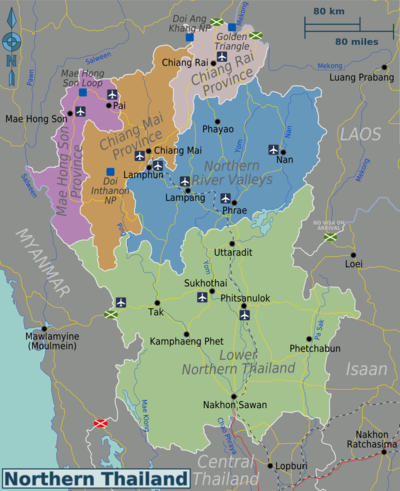 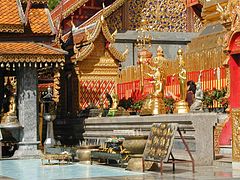 Surrounded by the highest mountains in Thailand, Northern Thailand is cooler than the rest of the usually sweltering country and thus particularly popular in the hot season from March to June. In the mountains at night temperatures occasionally dip below freezing in the cold season, although in the plains the daily average is rarely less than 25 degrees Celsius.

Culturally, Northern Thailand shows heavy influences from the neighboring cultures of Myanmar and Yunnan (China). The kingdoms of Lanna (centred at Chiang Mai) and Sukhothai were the first historical Thai nations.

Much of northern Thailand was for a long time off-limits due to a series of Communist insurgencies and Myanmar's drug battles and civil wars spilling over the border. Both problems have been largely resolved, although caution is still advised near the border with Myanmar in the provinces of Tak and Mae Hong Son.

The people of Northern Thailand speak their own dialect of Thai called Kham Meaung (or Kham Muang; คำเมือง), however standard Thai is widely understood. In addition, the hill tribes speak their own languages.

Here and there, especially at temples, you may spot signs written in a curious rounded script that looks more like Burmese than Thai. This is Lanna, the ancient script of the Lanna Kingdom, and while very few people can read or write it anymore, it's still popular in ceremonial usage.

The main airport in Northern Thailand is Chiang Mai, which has connections throughout Thailand and some international links too. Domestic flights (some of which may be seasonal) connect with Bangkok, Chiang Rai, Ko Samui, Mae Hong Son, Nan, Pai, Phitsanulok, Phuket, Sukhothai and Udon Thani.

Travel by train to Northern Thailand

Trains from Bangkok go regularly to Chiang Mai via Phitsanulok.

There is an extensive bus network with the main artery being Bangkok-Chiang Mai. From Chiang Mai, buses head northwest to Mae Hong Son and Pai, and further north to Chiang Rai.

Travel by train to Northern Thailand

The only railway line within Northern Thailand runs between Chiang Mai and Sukhothai (and further on to Bangkok).

There is an extensive network of public bus services with major hubs in Phitsanulok, Chiang Mai and Chiang Rai.

Minibuses, songthaews and tuk-tuks also serve many places which are not directly accessible by bus. Cheap but not always comfortable.

There are many car rental companies but driving in Thailand is not for the faint hearted. The driving etiquette and rules take some getting used to. The rural parts of northern Thailand are mountainous, and whilst most main roads are in good condition and asphalt covered, there can be some sharp and steep curves to navigate especially in Mae Hong Son.

Northern Thailand has some of the best biking roads in the world, which pass through some stunning scenery. For the more adventurous traveller, the best way to explore the area is by motorbike. There are a number of places in Chiang Mai and Chiang Rai where one can hire bikes or you can use a tour company to remove all the red tape, freeing you to simply enjoy your vacation.

The rolling hills and sweeping mountains, lush green forests and nature, are some of the visual delights of Northern Thailand.

The mix of ethnic peoples such as the hill tribes, Shan (Tai Yai), Burmese, and mainland Thais make it a rich melange of cultures. The vibrant cultural and historical tapestry of Northern Thailand makes it one of the most authentic places to visit in Thailand.

North Thailand shares borders with Myanmar and Laos such as at the Golden Triangle, the meeting point of Thailand, Laos, and Myanmar at the confluence of the Mekong River. Day trips are possible.

Temples in Chiang Mai and historical sites in Sukhothai are major cultural attractions of Northern Thailand, the birthplace of Thai civilization. When invaders pushed a Thai prince from Chiang Saen and the Golden Triangle in 1015, he moved his court to Kamphaeng Phet, a city that coalesced into the Sukhothai Kingdom, battling Angkor kings for control of the Thai plains, then a bulwark of the Thai defence against Burmese invasion.

Tours and excursions in Northern Thailand 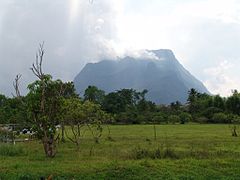 There are hill tribe villages in Chiang Mai and Chiang Rai, some of which have been obviously set up for the purpose of tourism, requiring an entrance fee and with villagers selling souvenirs. These are widely advertised as part of 1 day package tours from Chiang Mai.

There are hill tribe trekking package tours from 1-5 days available. This involves walking in the forest, visiting hill tribe villages and may include elephant riding and rafting. These will mostly be a very commercial and 'canned' experience. A few tour operators do offer more authentic experiences.

To visit authentic hill tribe villages, the best way is to hire a local guide and your own transport. This will allow you to venture off the main tourist trail where you will find there are many hill tribes still living traditionally.

Some operators attempt to limit the intrusion by restricting the number of visitors and employing local hill tribesmen as guides, but the competition is fierce and many simply aim to minimise costs and maximise profits.

A bowl of khao soi kai, with pickled cabbage and lime to add to taste, in Chiang Rai

Northern Thai food is somewhat different to that eaten in the rest of the country. Northerners prefer sticky rice over steamed, bitter flavours to hot ones, and avoid using coconut milk. The favoured meat is pork, which finds it way into a variety of sausages (cooked or fermented) and whose skin is fried as the ubiquitous snack khaep muu. The traditional way of sampling Northern food is a low round table known as a khan tok, laden with dishes. Some favorites include:

While the larger towns (Chiang Mai, Chiang Rai, Phitsanulok) offer a broad range of accommodation, in the smaller villages the tourist has to refer to guest houses and smaller hotels. Prices are usually lower than in Bangkok. Booking ahead (using the Internet or travel agencies) may give you better rates at some hotels.