Historically known for its cultural, political and commercial infrastructure, this ancient emirate of Ras Al Khaimah  portrays the rich and varied heritage of the region. The emirate boasts of its glorious naval past reckoned as an important Trade Center.

During the past two decades, Ras Al Khaimah has witnessed remarkable advancements particularly in the fields of commerce and education. Connected to the other emirates by modern highways, RAK has an efficient infrastructure, including hotels, hospitals, shopping centres and restaurants. Today it is a dynamically developing emirate, with excellent scope for industrial and business growth.

Ras Al Khaimah is also the home of one of the UAE’s finest museums, housed in the restored fort, ancestral home of the ruling family. Showcased are artefacts from the many archaeological sites in the Emirate and displays showing life in the past and outlining the emirates history. The object of the museum is to preserve the heritage of the emirates of Ras Al Khaimah in all its apects: Natural History, Archaeology and the traditional way of life of its people.

Ra’s al Khaymah (also Ras al-Khaimah) is the most northern Emirate at the Arabian Gulf, borders the Omani exclave Musandam and is one of the seven United Arab Emirates.

Ras Al Khaimah is nestled between the Hajjar Mountains on the East and the Persian Gulf on the West and shares mountainous borders with the Musandam Peninsula of Oman. With the completion of the new Emirates Highway, RAK is only about one hour from the emirate of Dubai.

The Emirate Ras Al Khaimah combines a fascinating and a relaxing tourist hub with its calm blue seas with clean white beaches, dramatic desert dunes and the majestic Hajjar Mountains. It has numerous fascinating tourist landmarks, beautiful wildlife conservations and sanctuaries. Golf has become one of the leading tourist attractions within the emirate.

See Get in section for visa details.

There is no railway system in Ras Al Khaimah or the UAE.

Ras Al Khaimah has a border with Oman (Musandam). It is rather easy to enter and exit the country by car. RAK has road connections with all the other emirates. The Emirates Road (E311) allows reaching Umm Al Quwain (UAQ) in half an hour, Sharjah in less than an hour, Dubai in 1–1½ hour (depending on the traffic) and Abu Dhabi in around 2½–3 hours. The old Coastal Road (E11) is slower but takes you directly to Sharjah via UAQ and Ajman. Fujairah can be reached via the mountain passage or via Masafi (E18) in about 1-1½ hour.

There are no passenger boat carriers operating directly to Ras Al Khaimah.

A few tour operators (mainly in the international hotels) organize Ras Al Khaimah city tours. Most of the big hotels provide buses for their guests to the RAK Old City and shopping malls.

Taxis or rental car are your only option to move around Ras Al Khaimah. Taxis use meters, are reasonably priced, easily available and honest. You can book a taxi 800 1 700 or just flag one on the street; it should not take more than a few minutes to find a taxi. 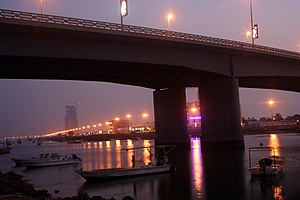 A bridge at Ras Al Khaimah.

Car rental is easily available option. Most of the roads in Ras Al Khaimah are in good condition and it is easy to find the way around (at least in the city). However, driving can be a challenging experience for those who are not used to slightly chaotic roads.

International car rentals are available in most of the hotels. There are also numerous smaller local companies around the town. You should expect to pay from 150 dirham for a small car per day.

Walking around Ras Al Khaimah is not easy due to the traffic, lack of sidewalks and zebra crossings and it is something not done and not recommended. For a pleasure walk, Corniche Road and beaches are the best and safest option.

Although the RAK Transport Authority has made plans to run buses within Ras Al Khaimah, so far no public buses are available.

A typical Emirati food is not widely available but it can be found in so called ‘popular kitchen’ types of restaurants. Lebanese cuisine mixed with some Arabic and Indian influences is often considered a local food. What you can expect in the restaurant is traditional Lebanese mezze (hummos, mutabal, salads, falafel), kebabs, biryani, fish or lamb. Ras Al Khaimah’s different cultures brought different tastes for food, restaurants of many types and origins are opened in the city. Considering a large number of Indians in Ras Al Khaimah, there are plenty of great Indian restaurants. All major international fast food restaurants chains are also present in Ras Al Khaimah and there are numerous local fast food outlets.

Vegetarians will be please to know that in most of the restaurants have at least one vegetarian option, there are also a few purely vegetarian restaurants in town and the concept is widely understood.

Arabic coffee and tea are available almost everywhere. So are the juices made from freshly squeezed fruits. Alcohol you can get only in the hotels, although you can buy it for your private use.

Where to stay in Ra’s al Khaymah

China has long overtaken the United States as the leading nation in the number of scientific publications. In the list...

Austria’s authorities have long failed to respond Many infections with the corona virus in Europe are said to be due...

After 4 new corona infections in the coastal city of Da Nang, the Vietnamese authorities let 80,000 people fly out of the metropolis. Most...

The number of corona infections in the tourist town in St. Wolfgang in Upper Austria has risen by eighteen to...

Infection numbers in Belgium are increasing strongly again and the government has announced stricter contact restrictions to prevent another lockdown. As of...

While Beijing vigorously promoted the 17+1 mechanism between China and Central plus Eastern Europe and actively implemented the One Belt...

Jan Marsalek, from a School Dropout to the Number 2 at Wirecard

Marsalek came to Wirecard at the age of 20. The tech-savvy school dropout had caught the interest of the Wirecard management...

Breaking News : Jan Marsalek possible citizen of the Caribbean Island of Grenada with a New Name

According to German Intelligence sources, Jan Marsalek – an Austrian and former COO of Wirecard might carry a Diplomatic passport...

The public prosecutor has made great progress in investigating the Wirecard balance sheet scandal. Accordingly, the group has been in the...

Medical protective material is currently a scarce commodity worldwide and that is why the procurement of FFP2 masks for Germany...