Herculaneum (it: Ercolano) is a town close to Naples in Campania, Italy. It is named after the ruined Roman city which forms its main attraction. Herculaneum was destroyed by an eruption of Mt. Vesuvius in AD 79, the same eruption that destroyed Pompeii. It is a UNESCO World Heritage Site.

Ruins of Herculaneum in the foreground, modern Herculaneum (Ercolano) in the near background, Vesuvius in the distant background on the right

In many ways Herculaneum is arguably a more interesting place to visit than Pompeii. Surrounded by volcanic rock, its location gives you a far clearer idea of the magnitude of the volcanic eruption. While roofs in Pompeii collapsed under the weight of falling ash, only a few centimetres of ash fell on Herculaneum, causing little damage. Subsequently, there was a succession of six flows of boiling mud (a mixture of ash and gases) which then solidified. These gradually buried the city’s buildings from the bottom up, causing relatively little damage. The good state of preservation of the site is due to its rapid filling by these flows, which prevented the buildings from collapsing. The high temperature of the first flow carbonized wood in the buildings and extracted water from it. Restoration work is ongoing, and while a lot of the timbers have been replaced, there is still much of the original timberwork present, albeit badly charred. Finally, the volcanic rock, or tufo, that covered the site for 1700 years formed an airtight seal. As a consequence there are many well-preserved buildings, many with the upper stories still intact, and some excellent frescoes and mosaics on both walls and floors to be seen.

Herculaneum really gives you an idea of how ancient Romans lived. For the independent traveller there is an additional advantage over Pompeii. The congested streets around the excavations (it: scavi) mean that access for tour buses is impossible. Thus there are far fewer visitors to Herculaneum than Pompeii. You don’t have to fight your way past hordes of other tourists in order to get into the buildings and you can explore the ruins at leisure without being overwhelmed by tour groups. These excavations also cover a much smaller site than do those of Pompeii and thus seeing the whole site is much less exhausting.

Frequent buses run to and from Naples. 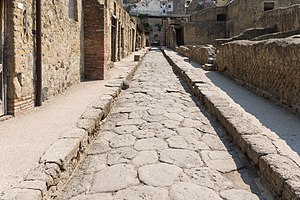 The Circumvesuviana trains take 25 minutes to get there from Naples and 40 minutes from Sorrento. To get to the ruins, get off at the  Ercolano Scavi station, from where you exit into a small square. Exit diagonally right (the only way out of the square) and walk 8 blocks downhill to the big arch – the ticket office & baggage check are about a further 2 minutes’ walk though the arch (pick up bag 30 minutes before site closing).

Beware, there are two train stations in Ercolano. The Ercolano Scavi Circumvesuviana station is on the Sorrento-Naples line, but the trains on the Naples-Salerno stop at the Porticini/Ercolano station. The Herculaneum site is not signposted from the latter station.

Herculaneum is on the

Autostrada from Naples to Salerno. There is a toll of €2 for using any part of this stretch of highway. Parking is not easy to find, particularly the type of parking you will want if your car is full of suitcases. Try the parking area behind the police station, just one block southeast of the entrance to the excavations. (€1 an hour in advance). The terrace with the Marcus Nonius Balbus statue and altar

The section below provides a brief summary of what can be seen.

Mosaic of Neptune and Amphitrite

At the ruins, be sure to see:

House of the Relief of Telephus

What to do in Herculaneum

Don’t be afraid to wander around. There’s still a lot of character to the ruins from the city it once was, and you never know what you’ll find.

PompeiIn info@pompeiin.com +39 3284134719 offers itineraries at the ancient Herculaneum lasting minimum 2 hours and covering all the highlights of the city such as Northern Cardo (road oriented north-south), the House of the Skeleton,Thermopolium (restaurant food), Men’s Thermal Bath, Temple of Augustali, Forum (main square), House of the Black Saloon, House of Neptune and Amphitrite, House of Bel Cortile, the Samnite House, the House of the Wooden Partition, the Bakery, the Gym, the Home of the Bucks, the Marina gate, terrace of Marcus Nonius Balbus and the beach. The guides are locals, are licensed, and have degrees in archaeology; they are able to provide tours for kids and disabled people, and with their vast knowledge of ancient history and society are capable of making the ancient Herculaneum come to life.

The ticket office to the site also has an excellent book shop offering a wide range of guides and maps.

Note: if you also plan to visit Pompeii buy the multi-site ticket – it is marginally cheaper that way. Also EU citizens under 24 or over 60 can get reduced admission if they can prove their age – so take your passport.

There are cake and pizza shops lining the street from the train station to the site.

Take your own food to the site, there’s only one vending machine, and that’s mostly for drinks. 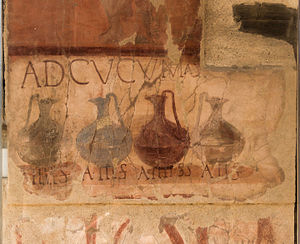 In ancient Herculaneum, you could buy wine at Ad Cucumas. Nowadays, you are best off bringing water with you, and make sure you take your empty bottles with you when you leave the excavations.

Where to stay in Herculaneum

Herculaneum’s excavations and the MAV museum can easily be seen in a leisurely day. Most visitors stay in Naples or Pompeii, or even take a day trip from further afield. The town of Herculaneum has few attractions that would justify an overnight stay.

The excavations of Herculaneum are in an area of some economic deprivation, so watch your belongings!

Limone is a town on the edge of Lake Garda. Browse down for full details of the current Coronavirus situation in Lombardy...

Alba is a town in the province of Cuneo in Piedmont, Italy, with a population of 30,000. Introduction Alba was inhabited before Roman...

Arezzo is a town in Tuscany, Italy that was an important Etruscan town. About Arezzo Arezzo’s origins as a place of human habitation...

Lombardy or Lombardia is a northern region of Italy, and with 10 million people is the most populous one. Producing...

Veneto is a region in north-eastern Italy, with its capital in Venice. It was an independent republic until the invasion of Napoleon in 1797....

Carpi is a city in Emilia-Romagna. Carpi could be a nice stop in your trip from south to north of Italy on...

Procida is a small island near Naples in Campania, Italy. Understand Marina di Corricella Procida is the smallest island of the Gulf of Naples, relatively...

Chiusi is a city in the Val di Chiana region of Tuscany, Italy. It was one of the twelve cities of the Etruscan League. In...

South Tyrol (German: Südtirol, Italian: Alto Adige or Sudtirolo, Ladin: Sudtirol) is the northernmost region in Italy, bordering Austria to the north and northeast, Switzerland to the northwest, and the rest of...

Sirmione is a comune in the province of Brescia, on the peninsula of the same name in Lake Garda. The Ancient Roman...