From Isaan.Live
Jump to: navigation, search 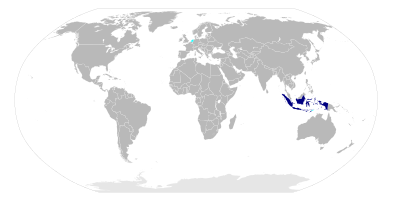 Indonesian (Bahasa Indonesia) is the official language and lingua franca of Indonesia, in addition to Timor-Leste (East Timor) and places with a significant Indonesian diaspora such as Southeast Asia and the Netherlands. With over 230 million speakers, there are a lot of people to talk to in Indonesian.

With over 230 million inhabitants dispersed in their local communities, the Indonesian language actually does not exactly serve as a mother tongue, as most of its speakers' first languages are local to their region, such as Javanese, Balinese, Betawi, Sundanese, Palembang, Bugis, and the many tribal languages of Papua. Its purpose is to be a language of unification between all the peoples of Indonesia, declared so since the Youth Congress on October 28, 1928.

Indonesia originates from the Malay language usually spoken in northeastern Sumatra, which was made famous by the Srivijaya Empire (7th-14th centuries), and then as a working language for trading ("pasar Malay", used in bazaars). As the origin comes from Malay, the two languages share many words in common, but when they were colonized by different countries, new words were formed from borrowings from their then-colonial overlords.

There are some varieties between local dialects of Indonesian, mostly caused by mixing Indonesian with local mother tongues, but these words are mostly used as a slang language that is heavily used on mass media and thus spoken by children and teenagers. This is especially common in Jakarta (the centre of the country's mass media), the rest of Java, Medan, and Eastern Indonesia. But that being said, all Indonesians can easily switch to the standard language, especially when talking with a foreigner.

Indonesian is very easy to pronounce: it has one of the most phonetic writing systems in the world, with only a small number of simple consonants and relatively few vowel sounds. One peculiarity of the spelling is the lack of a separate sign to denote the schwa. It is written as an 'e', which can sometimes be confusing.

In Indonesia, spelling reforms in 1947 and 1972 have officially eliminated several vestiges of Dutch in the otherwise very phonetic spelling, and the writing system is now nearly identical to Malay. However, the older forms remain in use to some extent (especially in names) and have been noted in parentheses below.

Stress usually falls on the second-to-last syllable, so in two-syllable words the first syllable is stressed.

As Indonesians pronounce the letter “e” in two different ways, this guide will highlight both the regular and accented version in the phonetics.

Consonants that use the old spelling style are written in parentheses:

NOTE: when two vowels are beside each other, and it's not one of the above diphthongs, they must be pronounced as separate syllables

Indonesian sentences structure is subject-verb-object. It more or less resembles English, but with more rules to follow, it actually looks more like Spanish!

In general, there are no grammatical gender and verb conjugation for person, number or tense, all of which are expressed with adverbs or tense indicators.

Adjectives are simply placed after the noun, not before. In this case, the word "goreng" means "fried":

If you want to use an adverb, place it after the adjective (if any) or the verb. Use "dengan" (DUHNG-an) followed by the adjective:

Negation marker ("tidak") (TEE-da') is placed before the verb:

Present continuous marker ("sedang") (suh-DANG) is placed before the verb; in case of a negative sentence, place it after "tidak":

Past participle marker ("sudah") (SOO-dah) is also placed before the verb; in case of a negative sentence, the word is "belum" (buh-LUM):

Possessive pronouns are simply placed after the noun, with the same form as normal pronouns:

If you use a place and/or time signal, they must be placed after the object. The place usually precedes the time signal. You can also place them at the beginning of the sentence, but only one of them is allowed. In this case, setiap hari means everyday.

You can also use a second adjective, but it must be joined by the word yang (lit: which is, that is, who is) after the first adjective. Usually the adjective types country & colour are put first before other adjectives:

Apa yang kamu makan? : "What are you eating?

The official term of verb has the prefixes me-, mem-, or meng- and/or suffix -kan. You most often can leave these out if the root word is already a verb. Use the prefix ter- to state you did something accidentally or something that has been done, while di- is used for passive actions.

The prefix ber- though, must be used with an noun or adjective so that it means to have and to become, respectively. Use the suffix (-nya) after a noun if you think the speaker knows the definite object you are referring to, an equivalent to English's "the".

When plurals are in use, they're often simply a repetition of the singular form, connected by a dash. For example, mobil-mobil (cars) is simply the plural form of "mobil" (car). But, beware that some words are tricky enough to be a plural, while it is actually a singular, such as: laba-laba (spider) vs 'laba' (profit). To avoid confusion, it is better off to use "banyak" (many) instead as a plural form for all objects: banyak laba-laba (spiders).

Indonesian is a so-called agglutinative language, which means suffixes are all attached to a base root. So a word can become very long. For example there is a base word hasil which means "result" or "success". But it can be extended as far as ketidakberhasilannya, which means his/her failure: "ke"(the state of)-"tidak"(not)-"ber"(-ing)-"hasil"(success)-"an"(the state of, with ke)-"nya"(his/her). These are largely modular; "berhasil" means "to have (good) result", for example.

If all else fails, simply using standard subject-verb-object form and common particles, while disregarding prefixes and suffixes, is generally unambiguous. For example, to state your intention to find a train station, simply "saya mau pergi ke stasiun" (I; want to; go; to; the station) is both clear and polite.

Using direct terms for "you" is not always considered polite in Indonesia. To call anyone "kamu", unless you know them very well, is rude. Opt for "Anda" or an honorific instead.

These are less frequently heard but, as a traveller, you may be addressed in this way.

Nona (NOH-nah)
For single or young ladies (analogous to Miss in English). You might hear it shortened into Non.
Nyonya (NYO-nyah)
For married or elderly ladies and formal for all females (same as Mrs., or Ma'am in US English usage). Rarely used, especially in big cities, though you might hear it shortened into 'Nyah' in some parts of Central and Eastern Java.
Tuan (too-AHN)
Formal honorific for males, usually elderly. (same as Mr. or Sir in US English usage). Rarely used in everyday conversation. You'll mostly find it in the phrase 'tuan rumah', meaning 'host'.

Different forms of some of these words are used across the archipelago. The ones below refer to someone who is roughly your own age or slightly older. Broadly analagous to the Indonesian kakak, they are informal so, if in doubt, revert to bapak and ibu. You will hear them being used to address serving staff in restaurants and shops.

in Bali
bli (blee) for males and mbok (uhm-BO') for females.
in Javanese-speaking communities
mas (mahss) for a male and mbak (uhm-BAH') for a female. Not to be confused with mbah (uhm-BAH) which means grandfather or grandmother.
in Sundanese-speaking communities (mostly West Java)
akang (AH-kahng) for males, and teteh (TEH-teh) for females.
among Minang speakers (originally from West Sumatra)
abang (AH-bahng) or uda (OO-dah) for males and uni (OO-nee) for females.
in Indonesian Chinese communities
koko (KOH-koh) and cici (CHEE-chee), for male and female, respectively.

Unless noted as (informal), phrases in this phrasebook use the formal, polite Anda and saya forms for "you" and "I" respectively.

note: if someone says this to you, you must reply back Wa'laikum salam (wah-ah-LEH-koom sah-LAHM) regardless of your beliefs, thus returning the wish of peace that was bestowed upon you. Not doing so is a serious breach of etiquette. 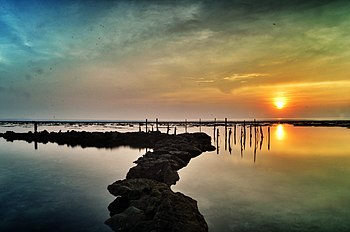 NOTE: the commonly used word bule ("BOO-lay") usually refers to white Caucasians, but is a derogatory term as it literally means albino.

Indonesian uses points/full stops for thousands and commas for decimal places, as in continental Europe. 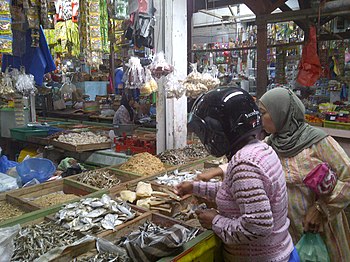 Knowing numbers is useful for instance when shopping on a market

The only special word in this case:

Subsequently, use the suffix "ke-" followed by the number: 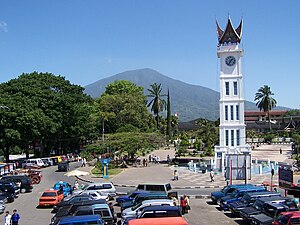 NOTE: the word time, when used to tell how many times or multiplications, is kali ("KAH-lee"). The word itself literally means waktu (WAH'-too) 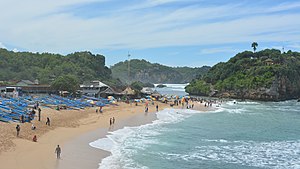 A week is from Monday to Sunday, although in calendars, it is Sunday to Saturday.

First one should write the day, after that the month and then the year. 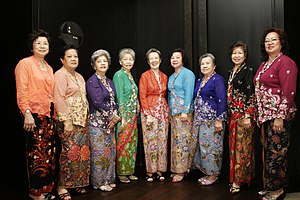 Colorful clothes made of the traditional fabric batik 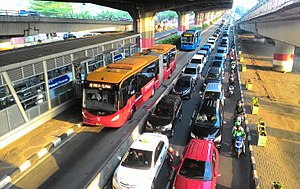 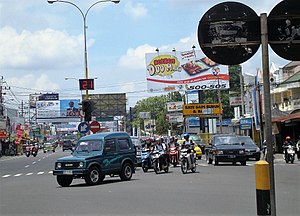 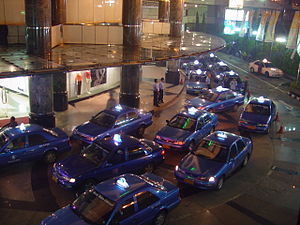 Taxis are pretty dependable in most cities and large towns 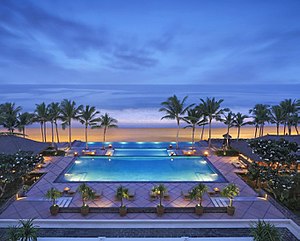 Evening view to the sea from a "splurge" hotel in Bali 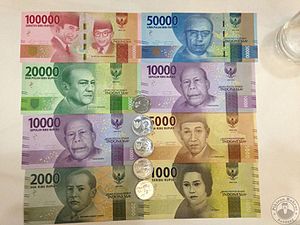 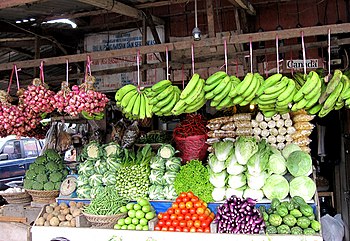 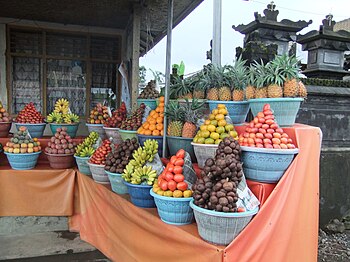 An array of tropical fruits sold in Bali 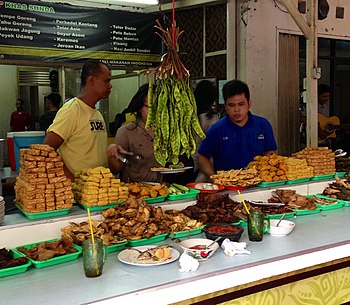 Sundanese dishes at a food stall 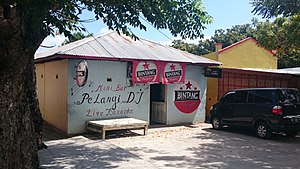 Mini bar in the town of Bira, Sulawesi. Bir is beer in Indonesian. 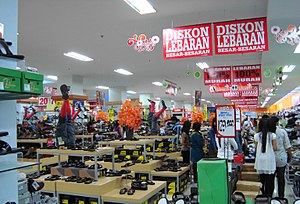 Shoes in an Indonesian department store

NOTE: the Islamic holy book is referred to as al-Quran (ahl KOOR-ahn) 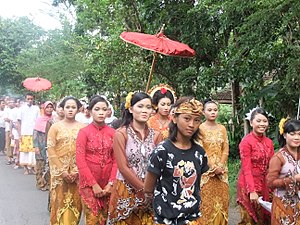 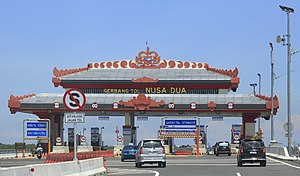 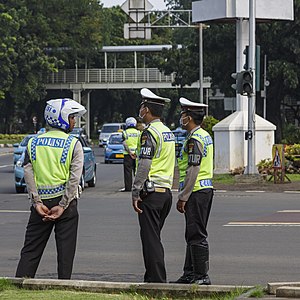 NOTE: Be sure it is clear from context that you aren't offering a bribe. If they ask for a bribe, they may use the phrase uang damai (OO-ahng DAH-migh) (lit. peace money).

In general, the names of countries either retain their official name or are loaned from English, with some spelling and pronunciation adaptations suitable for Indonesian speakers. Names ending with -land (i.e.: Poland, Finland, Ireland, or Iceland) usually take -landia (respectively Polandia, Finlandia, Irlandia, Islandia). Exceptions are listed below.

For indicating nationality, use the word for person orang (OH-rang) followed by the name of the country.