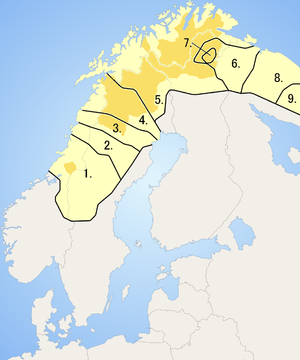 Sami is a group of languages spoken by the Sami people who dwell in northern Europe. Their traditional homeland consists of the central and northern parts of Norway and Sweden, northern Finland, and the Murmansk Oblast in Russia, although they are now a minority in most of this area.

Because of earlier language politics, not all Sami speak Sami and some Sami languages are extinct. There are nine living Sami languages. They are Finno-Ugric languages and thus have many linguistic similarities and some common vocabulary (including many loanwords) with e.g. Finnish, Karelian and Estonian. The similarities are not enough for understanding, but greatly help in learning the language. Even the Sami languages are generally not mutually intelligible, but many Sami understand the neighbouring languages. There are also loanwords from the unrelated Scandinavian languages Norwegian and Swedish.

Northern Saami (davvisámegiella), the most spoken Sami language and the one used in this phrasebook, is spoken mainly in northern Norway, northern Sweden and much of the Sámi area in Finland. It is used often in towns such as Kiruna (Giron), Utsjoki (Ohcejohka), Kautokeino (Guovdageaidnu) and Karasjok (Kárášjohka).

Like Finnish, Sami is written quite phonetically, with a certain letter mostly pronounced the same way and doubled letters meaning longer sounds (but "á" is pronounced as a long "a" in western dialects). Northern Sami uses the Latin alphabet with some extra letters, some of which are not found in Swedish, Norwegian or Finnish. The current writing system is from 1979, modified in 1985.

Below are the vowels and consonants, with name of the letter (spelt in Sami) and normal pronunciation with IPA codes.

Note that Đ đ in Sami is a different letter from the Icelandic Ð ð and African Ɖ ɖ, although sometimes similarly looking.